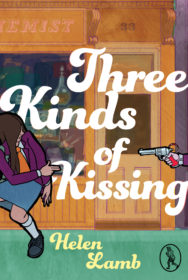 Once upon a time, there was a girl who lived in a house of clocks, a house that ticked like a bomb…

Officially, Olive’s only been gone one day, but Grace knows she’s been lost much longer. Her schoolmate’s disappearance forces Grace to recall the dark secrets she and Olive still share – including the one that shattered their friendship four years ago, the one that haunts Grace now. With the adults around her caught up in their own dramas and deceptions, Grace struggles to make sense of her past and present before she too becomes lost.

“Three Kinds of Kissing is a modern classic about friendship, loss of innocence and the myriad ways families can self-implode.” – Cynthia Rogerson

“Three Kinds of Kissing is the sort of book that makes you forget there is an author involved. It captures both the mood of a small-town community at a particular moment of change between the late 1960s and early 1970s, and the sulky, eager, sniping, adventurous minds of the girls who are its central characters, caught between childhood and adolescence, yearning for the security of home and family yet also desperate to escape. And it shows with unerring accuracy how, as adults, most of us never stop being the children we once were.” – James Robertson

Helen Lamb was a fiction writer and poet whose work was widely published in literary journals and anthologies. Many of her stories were broadcast on radio, and her poems have been reproduced as National Poetry Day postcards. She received Scottish Arts Council writing bursaries in 1999 and 2002, and was appointed a Royal Literary Fund Fellow in 2003. Helen’s books include a poetry collection with Magi Gibson titled Strange Fish (Duende, 1997), and a short story collection, Superior Bedsits (Polygon, 2001). Helen died in 2017, shortly after completing her first novel, Three Kinds of Kissing.