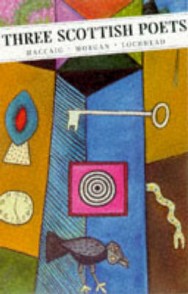 A selection of some of the finest works by three of Scotland’s best-known and best-loved poets: Norman MacCaig, Edwin Morgan and Liz Lochhead.

Norman MacCaig was born in Edinburgh in 1910. His formal education was firmly rooted in the Edinburgh soil: he attended the Royal High School, Edinburgh University and then trained to be a teacher at Moray House. Having spent years educating young children he later taught Creative Writing, first at Edinburgh University, then at the University of Stirling. He died in 1996. His poetry, written in modern English and famed for its humour and unpretentious style, won him several awards. Edwin Morgan was born in Glasgow in 1920. His studies at Glasgow University were interrupted in 1940 when he joined the Royal Army Medical Corps, but he returned to university and graduated with a First Class Honours degree. Turning down a scholarship at Oxford, he lectured at Glasgow University until 1980. He has published numerous volumes of poetry and translated works from many languages. His various awards include the Queen’s Gold Medal for Poetry in 2000 and the prestigious Weidenfeld Prize for Translation in 2001. In 1999 he became Glasgow’s first Poet Laureate, and in 2004 was given the title of Scotland’s National Poet. He died in 2010. Liz Lochhead, born in 1947 in North Lanarkshire, has built an impressive, award-winning reputation as poet, playwright and performer attracting a large and admiring public. In 2011, Lochhead was named the second Scottish National Poet, after the death of Edwin Morgan.