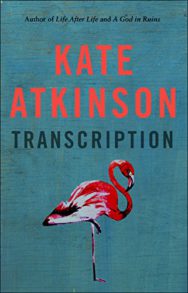 THE MAGNIFICENT NEW NOVEL BY BESTSELLING AWARD-WINNING KATE ATKINSON`Think of it as an adventure, Perry had said right at the beginning of all this.And it had seemed like one. A bit of a lark, she had thought. A Girls’ Own adventure.’In 1940, eighteen-year old Juliet Armstrong is reluctantly recruited into the world of espionage. Sent to an obscure department of MI5 tasked with monitoring the comings and goings of British Fascist sympathizers, she discovers the work to be by turns both tedious and terrifying. But after the war has ended, she presumes the events of those years have been relegated to the past for ever.Ten years later, now a producer at the BBC, Juliet is unexpectedly confronted by figures from her past. A different war is being fought now, on a different battleground, but Juliet finds herself once more under threat. A bill of reckoning is due, and she finally begins to realize that there is no action without consequence.Transcription is a work of rare depth and texture, a bravura modern novel of extraordinary power, wit and empathy. It is a triumphant work of fiction from one of this country’s most exceptional writers.

"Kate Atkinson is a wonderful writer. I want to write like her when I grow up. Transcription shows she's at the peak of her powers. Full of beautiful, delicate, sharp sentences and characterisations. A spy novel that dismantles the whole genre. A class act, as ever." — Matt Haig "Praise for Kate Atkinson: Inexhaustibly ingenious" — Hilary Mantel "Kate Atkinson is a marvel" — Gillian Flynn "Kate Atkinson is the author who really made me want to write" — Jojo Moyes "Very witty and compassionate about the human condition" — Marian Keyes "The kind of book you shove in people's faces, saying `You gotta read this!" — Stephen King "Thought-provoking and non-conformist" * Sunday Times * "Funny, bracingly intelligent…a genuinely surprising novelist" * Guardian * "Atkinson is brilliantly, defiantly playful with the stuff of fiction" * New Statesman *

Kate Atkinson won the Costa (formerly the Whitbread) Book of the Year prize with her first novel, Behind the Scenes at the Museum. Her bestselling novels include the four featuring former detective Jackson Brodie which became the BBC television series Case Histories, starring Jason Isaacs. Her 2013 novel Life After Life spent a record number of weeks on top of the bestsellers lists on both sides of the Atlantic, and won the South Bank Sky Arts Literature Prize and the Costa Novel Award, a prize Kate Atkinson won again in 2015 for A God in Ruins. Her new novel Transcription comes out in September 2018.