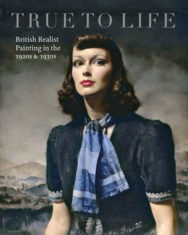 Home > Uncategorized > True to Life: British Realist Painting in the 1920s and 1930s

British realist art of the 1920s and 1930s is visually stunning – strong, seductive and demonstrating extraordinary technical skill. Despite this, it is often overshadowed by abstract art. This book presents the very first overview of British realist painting of the period, showcasing outstanding works from private and public collections across the UK. Of the forty artists featured in the show, many were major figures in the 1920s and 1930s but later passed out of fashion as abstraction and Pop Art became the dominant trends in the post-war years. In the last decade their work has re-emerged and interest in them has grown. Interwar realist art embraces a number of different styles, but is characterised by fine drawing, meticulous craftsmanship, a tendency towards classicism and an aversion to impressionism and visible brushwork. Artists such as Gerald Leslie Brockhurst, Meredith Frampton, James Cowie and Winifred Knights combine fastidious Old Master detail with 1920s modernity. Stanley Spencer spans various camps while Lucian Freud’s early work can be seen as a realist coda which continued into the 1940s and beyond.Featuring many Scottish and women artists, this book promises a fascinating insight into this captivating period of British art.Exhibition to be held at the Scottish National Gallery of Modern Art, Edinburgh from 1 July to 29 October 2017.

Patrick Elliott is Senior Curator at the Scottish National Gallery of Modern Art, Edinburgh. He has written extensively on modern and contemporary art. Recent publications include Another World: Dali, Magritte, Miro and the Surrealists (2010), Tony Cragg (2011), The Two Roberts: Robert Colquhoun and Robert MacBryde (2014) and The Amazing World of M.C. Escher (2015).Sacha Llewellyn is an independent writer and curator and Director of Liss Llewellyn Fine Art, with a particular interest in interwar British Modernism. She co-curated, ‘Alan Sorrell – A Life Reconstructed’, for the Sir John Soane’s Museum in 2013, and guest-curated the Winifred Knights survey exhibition at Dulwich Picture Gallery (2016). She has published widely on the artists of the British School at Rome, as well as contributing to and editing many books and catalogues on British art.