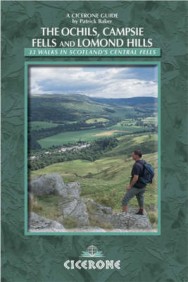 A guide to 33 day walks on the Ochils, Campsie Fells and Lomond Hills. The book offers a mixture of routes, including many popular peaks such as Ben Cleuch, Meikle Bin and West Lomond, as well as areas that are well off the beaten track. The walks have been chosen to reflect the diverse landscape that exists in these ranges, and affords as much importance to smaller peaks and lower-level walks as it does to larger hills and high traverses. Several of the walks include peaks known as ‘Donalds’ – hills in lowland Scotland over 2000ft that have a drop of 100ft on all sides. The majority of walks included are circular, and wherever possible, start from a suitable place to park a car. These are the most accessible hills in Scotland’s Central Belt, despite their close proximity to Edinburgh, Glasgow and Perth, these three ranges remain a remarkably uncrowded wilderness area. Reprinted in 2014 with updates.

Reviews of Walking in the Ochils, Campsie Fells and Lomond Hills: 33 Walks in Scotland’s Central Fells

I have just recently purchased this book and done lots of walks from it and it really opened up my local hills to me. Previously there were many hills in the Campsies and the Ochils that I wanted to climb but couldn't figure out a safe route to them from the OS maps but this outstanding book gives you detailed route information all following easy to identify features on the ground to use as navigational handrails, it is well written and uses extracts from the relevant OS maps to illustrate the routes. There are many little known and little walked but spectacular hills featured here that you wont find in any other guidebook. At last an excellent guide book for the Campsies/Ochils and Lomonds. Congratulations to the author. Reviewed on Amazon.co.uk 'It's clear the author knows his subject well and has tramped the hills described in this book very many times. His acquaintance, wisdom and knowledge of the three areas stand out proud. The book is a bargain at GBP10 and for anyone planning to explore the three areas described, there is no better way than taking this book with you.' Scottish Mountaineer magazine / February 2007

As a keen outdoor enthusiast, Patrick Baker spends the majority of his free time walking, climbing or scrambling in the Scottish hills. This passion for the outdoors has led to several expeditions in major mountain ranges across Europe but closer to home, time spent in the mountains of the West Highlands and the Cairngorms and the hills of the Central Scotland is an ongoing source of interest and enjoyment.