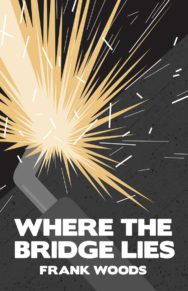 Home > Fiction from Scotland > Where the Bridge Lies

Where the Bridge Lies

“The Clyde wasn’t just just a stream of water. It was an entity, a being that threaded through the lives of the people who lived here, sometimes giving, sometimes taking away.”

1941. The Clydebank Blitz robs Nessa Glover of her husband and five children. Struggling with her new reality she becomes a shipyard welder, and finds herself drawn into trade union activism. One day she visits Harmony, a commune built on notions of equality and unity, led by the charismatic Fergus Abercrombie. But not everything is quite as it seems at Harmony.

1980. Keir Connor is a traumatised war correspondent. When his father dies, he is left with a letter –a letter that takes him to Clydebank in search of answers. His journey leads him on to Harmony, now Laggandarroch, a residential school for disadvantaged children, as he tries to unlock the past. One thing is sure: Harmony is key.

Where the Bridge Lies is the first novel by Frank Woods.

Frank Woods lives and writes in North East Scotland. He has worked as exploration geologist, journalist, and primary school teacher. Eventually he settled into a career as a psychologist specialising in the problems of children and young people. His short stories, poetry, and articles on diverse subjects have appeared in a wide range of magazines and newspapers. Dancer in the Light, his biography of Gerda Geddes (www.gerdageddes.com), was published in 2008.