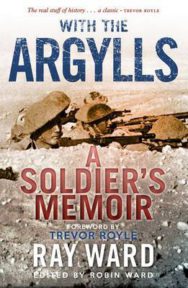 Home > Academic > Arts and Humanities > With the Argylls: A Soldier’s Memoir

With the Argylls: A Soldier’s Memoir

When Ray Ward died in 1999, his sons discovered an old and dusty manuscript in an Afrika Korps ammunition box in the cellar of the family home in Glasgow. These papers contained a collection of their father’s memoirs, which detailed his experiences as an infantry officer during the Second World War, when he served in the 1st Battalion of the Argyll and Sutherland Highlanders. His memoirs give vivid accounts of Ray Ward’s time in Eritrea, Abyssinia, Egypt, the Western Desert, Sicily and mainland Italy, and bring to life individual episodes of bravery, adventure and danger that characterised the North African and Italian campaigns.

Reviews of With the Argylls: A Soldier’s Memoir

'a wonderful example of a soldier's memoir' – Trevor Royle

Ray Ward was born in Glasgow in 1916. Six months after the outbreak of the Second World War, he joined the Argyll and Sutherland Highlanders. After the war, he was a semi-professional singer, freelance writer, and school teacher in Glasgow.