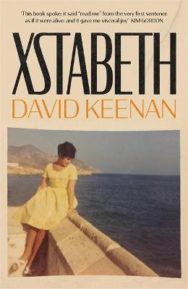 Home > Fiction from Scotland > Xstabeth: A Guardian Book of the Day

Xstabeth: A Guardian Book of the Day

INCLUDES ‘PREQUEL’ THE TOWER THE FIELDS THE TRANSMITTERS’This book spoke, it said “read me” from the very first sentence as if it were alive, it gave me visceral joy’ Kim Gordon’Reading [Xstabeth] feels like being cut open to the accompanying sound of ecstatic music’ Edna O’Brien’Prepare for more of that inimitable Keenan narrative voodoo brilliance’ Wendy ErskineIn St Petersburg, Russia, Aneliya is torn between the love of her father and her father’s best friend. Her father dreams of becoming a great musician but suffers with a naivete that means he will never be taken seriously. Her father’s best friend has a penchant for vodka, strip clubs and moral philosophy.When an angelic presence named Xstabeth enters their lives – a presence who simultaneously fulfils and disappears those she touches – Aneliya and her father’s world is transformed.Moving from Russia to St Andrews, Scotland, Xstabeth tackles the metaphysics of golf, the mindset of classic Russian novels and the power of art and music to re-wire reality. Charged with a consuming intensity and a torrential rhythm that pulses with music, it is an offering of transcendence and a love letter to the books of Chandler, Nabokov and Dostoevsky, by a writer who is rewriting the rulebook of contemporary fiction.

Reviews of Xstabeth: A Guardian Book of the Day

Prepare for more of that inimitable Keenan narrative voodoo brilliance. In Xstabeth it'll give you a special and magickal alchemy of metaphysics, singer-songwriters and golf, angelic entities, memory and grace. What a thrill to take this remarkable trip to St Andrews and Russia, in the arms of music and synchronicity — Wendy Erskine I sometimes think David Keenan dreams aloud. His prose has the effortless, enigmatic , unsettling quality of dream. In Xstabeth, as with For the Good Times, the narrative shuttles between episodes of nearness and chasm … Reading it feels like being cut open to the accompanying sound of ecstatic music — Edna O'Brien This book spoke, it said "read me" from the very first sentence as if it were alive, it gave me visceral joy and a constant feeling of being unhinged so I had to keep up with it — Kim Gordon A delicious, dark and haunting book, from the first page I couldn't let it go and I know Xstabeth will stay with me for ever. The book contains magic and intrigue. It is a 21st century cult classic — Salena Godden Inspiring and brilliant — Kavus Torabi XSTABETH is special. A ghostly shimmer of a novel — Kevin Williamson You can lose yourself in the novel's weird loops and whorls, searching for resolution while luxuriating in the lack of it . . . This is Keenan's most gnomic, gnostic work yet – at times it seems only loosely tethered to reality – yet it's never portentous. There's something here of the 19th-century Russian novelists' passion for authenticity, their fervid drama. There are funny lines, too, which undercut the mysticism in a satisfyingly earthy way . . . the sense of a synchronous world being created even as you read, where past visions spark memories that echo the present, leaping across synaptic gaps with the grace of a bird in flight — Carrie O'Grady * Guardian * As close to a song as any prose work I've read. And Keenan is gloriously, unfashionably mystical in his approach — Peter Murphy * Irish Times * It is one of the most interesting novels I've come across this year. Reading it, I felt the unmistakable pulse of something living, and it isn't done with me yet — John Phipps * Literary Review * In a record shop in St Andrews, Aneliya and her father come across a Russian pressing of the Xstabeth record. The man behind the counter puts it on. "Pure loner folk," he says admiringly. "A genre of one." The same might be said of this gloriously sui generis novel — Jonathan Derbyshire * Financial Times * The prose has a mesmeric quality… Xstabeth reprises the manic idealism of This is Memorial Device (2017), Keenan's exuberant debut novel about the post-punk scene in 1980s Airdrie. Tomasz, a disciple of Leonard Cohen and Nick Drake, cuts a brooding but sympathetic figure — Houman Barekat * Spectator * One of the most exciting new writers around. * Daily Mail * The pleasures of Xstabeth lie in the ways in which the inventive Keenan plays with language and form — Sarah Hughes * The i * Tautly edited, the sheer stylistic euphoria of Keenan's form seems to breathe itself to life . . . XSTABETH is a psychedelic circle from darness into light * Irish Times * It is one of the most interesting novels I have come across this year. Reading it, I felt the unmistakable pulse of something living, and it isn't done with me yet — John Phipps * Literary Review * Though possessed of a driving intensity and an abundance of ideas, his prose never feels didactic or dry. It's an invitation to share in what he feels – as raw, warm, bloody and poignant as it is intellectually engaged — Hannah McGill * Scotsman * Buzzing with energy and manic idealism, Xstabeth is a wild ride that shatters expectation * Dazed * Keenan's hot streak continues with this bold effort that travels between St. Andrews and Russia, taking in on the metaphysics of golf and the power of art and music * List *

David Keenan is the author of four critically-acclaimed novels; the cult classic This is Memorial Device, which won the London Magazine Prize; For the Good Times, which won the Gordon Burn Prize; The Towers The Fields The Transmitters and Xstabeth. He lives in Glasgow, Scotland.