Phoebe Anna Traquair was a unique figure in British culture. The first significant professional woman artist in modern Scotland, she was also a key figure in the Arts and Crafts movement. A free spirit, Traquair celebrated life through image, colour and texture, taking her inspiration from Renaissance painting, the art and poetry of Blake and the music of Wagner. She produced a huge body of work, from vast, breathtaking mural decorations and sensual embroideries to exquisite illuminated manuscripts and enamels. Using her own words and those of friends and contemporaries, this beautifully illustrated book sheds new light on the ambitions of late Victorian and Edwardian culture.

In January 1904 a quartet of remarkable embroideries left the Edinburgh home of their designer and maker Phoebe Anna Traquair (1852–1936) for America, to be shown in the Louisiana Purchase Exposition that summer. Called The Progress of a Soul and created between 1893 and 1902, these two-metre high textiles, in four panels, illustrated the epic journey of the human spirit through life. A narrative sequence inspired by a tale by the aesthete Walter Pater (1839–1894), the embroideries were intended as an expression of personal experience. They drew on a wealth of ideas from literature, music and the visual arts. A century on they still dazzle in their imagination, colour and sheer technical bravura. 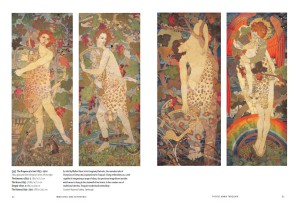 The Progress of a Soul

Phoebe Anna Traquair occupies a unique position within British art. On the one hand, she was Scotland’s first significant professional woman artist of the modern age. On the other, she was a valued contributor to the British Arts and Crafts movement. Believing in the indivisibility of the arts, this petite woman worked in fields as various as embroidery, manuscript illumination, bookbinding, enamelwork, furniture decoration, easel painting and, not least, mural decoration. Committed equally to public art and studio crafts, her career spanned four decades from the 1880s. She painted the interiors of no fewer than six public buildings, one of which has walls some twenty metres in height. The stained glass artist Louis Davis, having seen her at work perched high on her scaffolding, referred to her as ‘a woman the size of a fly’. For the poet (and fellow Dubliner) W.B. Yeats (1865–1939), she was ‘a little singing bird’.

This is the story of a confident woman who wanted to make her mark in the art world. In the 1890s and 1900s her studio crafts were exhibited and reviewed, her painted buildings written up in the press and regarded as showplaces to be visited. But her work, so intellectually and emotionally inspired by poetry and music, fell completely out of fashion during the Great War. In the 1980s her craftwork quietly began to resurface in British exhibitions, including The Last Romantics (1989) at London’s Barbican Art Gallery. These, together with the gradual opening of ‘her’ buildings on ‘doors open’ days and, above all, a large exhibition of her work mounted at the Scottish National Portrait Gallery in 1993, put her back on the cultural map. In this, the public has worked collectively with historians, curators and conservators to reclaim her for the art world. As a direct result her buildings are now treasured by their communities and her craft is in demand amongst collectors. 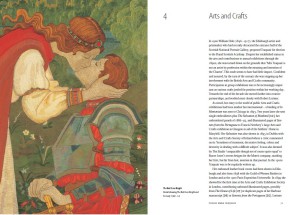 Seen against the background of her own age, Traquair shines out as a true professional. Driven by a need for creative fulfilment, she networked, negotiated commissions and participated in exhibitions in Britain, Europe and America. Her work may be classified as artistic craft: she was never a modern ‘designer’ but rather always brought an artist’s mind and eye to whichever medium she was currently engaged. However, to call her a ‘decorative artist’ might be to limit her aspirations. Like many other decorative artists she delighted in nature, seeking to ‘match the beauty of red-tipped buds, sunlight through green leaves, the yellow gorse on the hill, the song of wild birds’. The Edinburgh-based Arts and Crafts architect Robert Lorimer (1864–1929), a friend and associate, emphasised her common-sense attitude to life, commenting that she was ‘so sane, such a lover of simplicity, and the things that give real lasting pleasure are the simplest things of nature’. Yet, while often immersed in the minutiae of the natural world, Traquair saw these, like the writer John Ruskin (1819–1900), as part of one vast grand plan. Her ideas, underpinned by Christian faith, were intended above all to reflect the immensity of spiritual life and culture.

In her art Traquair wished to celebrate the potential of the human mind. The poetry and art of William Blake (1757–1827) and Dante Gabriel Rossetti (1828–1882) were valued for their exploration of the spirit. In addition, the epic romance was a literary form enjoyed for its rich and traditional narrative of journey and resolution. To realise her work Traquair responded to past arts, uniting ideas in order, perhaps paradoxically, to understand and engage fully with modernity. 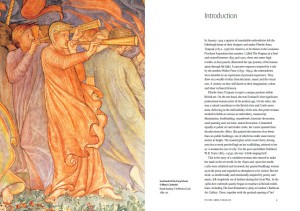 Traquair’s concerns were with both personal values and universality, and with the role of art within society. Whilst never a follower of fashion, her approach to art was, nonetheless, linked to the enlightened humanism of her age and specifically to Arts and Crafts ideals. The scale of her ideas and her synthesising romanticism were also in line with modern thinking across the creative arts. The Progress of a Soul, in its textures, finely-tuned colours and rich imagery, was intended to assimilate nature, man and God to ‘mirror the whole world’, to use words applied by composer Gustav Mahler to his cosmic third symphony, a work composed in parallel.

With a focus and resolve as keen as those of many of her contemporaries, Traquair may be called a modernist. In particular, in seeking to imagine and illustrate an account of life’s journey, she shared ideals with a range of modern artists, poets and composers. John Duncan’s Celtic murals in Edinburgh’s Ramsay Garden, even Edvard Munch’s great Frieze of Life, and, in music a few years later, Frederick Delius’s A Mass of Life and Ralph Vaughan Williams’s setting of Walt Whitman’s poem Toward the Unknown Region were among works which also explored the range of human experience. 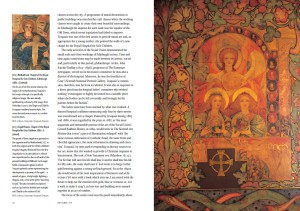 Chapel of the Royal Hospital for Sick Children

The Progress of a Soul, a narrative worked out across four movements or verses, was directly and intuitively inspired by both music and literature. A visual tone poem, it is a heartfelt, mature reflection on ‘life’s rich tapestry’.

This book, also in four parts, sets out to place these embroideries within the context of her life and work. Different chapters look at her early involvement in widening the role of art in society, her development of poetic ideas and creative synergy, and her desire to participate in the shared, professional world of art and craft. Threaded thematically through the book is her principal theme, identified by Yeats as ‘the drama of the soul’. Using her own words and those of friends and contemporaries, this study sheds new light on the ambitions of late Victorian and Edwardian culture.

Elizabeth Cumming is an art historian and freelance curator who lives and works in Edinburgh. She has written numerous texts on British, and especially Scottish, art and design. Her books include The Arts and Crafts Movement (as co-author), Thames and Hudson’s World of Art series and exhibition books, Glasgow 1900: Art & Design for the Van Gogh Museum, Amsterdam, and The Scottish Colourists 1900–1930 for the Scottish National Gallery of Modern Art, Edinburgh. Her book Hand, Heart, and Soul: The Arts & Crafts Movement in Scotland, Birlinn, was shortlisted for the 2007 Saltire Society Research Book of the Year. Her latest book, to celebrate Dovecot Studios’ centenary, was published in 2012 by Lund Humphries.