For David Robinson’s first column for Books from Scotland he writes about two very different pilgrimages in the recently published Poacher’s Pilgrimage by Alastair McIntosh and White Sands by Geoff Dyer.

The thing about pilgrimages, as Chaucer never quite got round to saying, is that where you are going isn’t often as important as the people you are going there with.

For me, it works like that with travel books too. I want more than just a journey. I want even more than finding out what it’s like to live in a place, what the people there are like and what they think about life. On a good day, I can get that from a newspaper travel feature. From a book, I expect more: I want it to be written so well that, when I finish it, I will feel as though I have been on the journey myself.  And the very best – the ones in which the writer’s mind matters as much as the view from the window – leave me thinking that it would be hard to imagine making a particular journey with anyone else.

Alastair McIntosh’s Poacher’s Pilgrimage: An Island Journey (Birlinn, £20) is such a book. A meditative and discursive account of a 12-day hike across Harris and Lewis from Rodel to Butt of Lewis, he planned it to take in many as possible of his native island’s “sacred sites” – the beehive shieling huts (some of which have been standing for 2000 years) and their often neglected pre-Reformation chapels and holy wells.

Now perhaps you or I could, given a compass and all the right gear, go splashing across the boggy wastes of mid-Lewis, and with enough luck we might stagger through to the end of the trek. What we wouldn’t be able to do is to write a book like McIntosh’s at the end of it, tracing as it does, not just the journey across his native Lewis but the contours of his own singular and eclectic mind.

He is certainly much nicer than some of the other writers I like to armchair-travel with – less garrulous than Paul Theroux, and certainly less laconically solipsistic than Geoff Dyer, whose White Sands: Experiences from the Outside World has also just been published (Canongate, £16.99). In it, there’s a chapter entitled “Pilgrimage” about a visit he made to Theodor Adorno’s house in Brentwood, where Adorno lived in exile from the Nazis on what he called “this remote western coast” and the rest of us call LA. There, Adorno wrote Minima Moralia: Reflections on a Damaged Life, a book which marks him out as what Dyer calls a “badge writer”, in other words somebody to be seen reading. Sure enough, asked by the Guardian to pick a book that defined a summer for him, this was what he picked “to distinguish myself from novelists who I guessed would choose The Go-Between or Tender is the Night or whatever.”

The two pilgrimages – Dyer’s and McIntosh’s – could hardly be more different. Dyer knows his way through Adorno’s thickets of theory, and conjures up that strange time when so many European exiles [Mann, Schoenberg, Stravinsky] found themselves way out west, blinking in the California sun. But what he really wants to write about is the inconsequentiality of dropping round to Adorno’s old house and talking to the woman who lived there and didn’t know much about who he was, or cycling there from Muscle Beach and musing whether old Theo “ever stood there with the other intellectual expats transfixed by what a beautiful thing he was seeing through the muscular lenses of his spectacles, fleeting instants in which we catch a glimpse of a unified field…”.

Yet while Dyer riffs, lightly but entertainingly, on Adorno’s incongruous and easily forgotten West Coast sojourn, McIntosh’s Western Isles pilgrimage is altogether deeper and more purposeful. Essentially, it’s about nothing less how we can best live in the world, the nature of God and the nature of Hebridean spirituality. In all three cases, his answers are thought-out but unpredictable.

And here we come to what I mean about a good travel writer needing to have a mind worth following as well as an itinerary – a mind that challenges the reader or pulls their thoughts in unexpected directions. McIntosh is good at this: a committed pacifist, for the last 19 years he’s been a Quaker devil’s advocate at the British Army’s officer training college at Shrivenham, invited down to make the case for a strategy of non-violence over the Army’s more usual bombs and bullets approach. Although under Chatham House rules, we aren’t given the names of the top brass he is talking to, he is allowed to write about their discussions and does so in his book. They’re fascinating.

McIntosh is one of those people with a solidly consistent worldview, and an engaging lack of ego to match. A leading radical ecologist, he has played a prominent role in the campaign against the Harris superquarry and the Eigg buy-out, and helped to set the GalGael Trust, one of the most important community projects in the Gorbals.

But what’s impressive about his pilgrimage is that its true dimensions only emerge gradually, like the shape of the moorland hills he is walking across. Instead, it is crafted, layered. He’ll mention his Shrivenham talks, not to grandstand, but to shoot down the “just war” theory that Christianity has aligned itself to since Augustine. Christ’s teachings about non-violence were altogether more radical, he argues, and need to be underpinned by a theology free of violence too. Naturally, he comes up with one.

Normally, it’s true, any book I pick up which mentions theories of penal substitutionary atonement don’t stay picked up for very long. But Poacher’s Pilgrimage is different. By the time I hit the theology, I’ve been striding out alongside McIntosh since Rodel, and he’s kept me engaged, so I cut him some slack. Already I’ve started to get the hang of how he thinks – that coherent yet diffuse cast of mind – as I’ve been mentally accompanying him through a landscape he’s loved since childhood, and he has spent pages filling it with memory, history, literature, language and (gulp!) metaphysics and theology too.

This island, he’s saying, isn’t what we think is. It’s a corrective against anomie, materialism, and spiritual disconnection. If you walk into its pre-Calvinist past, unblock (physically as well as metaphorically) its old Celtic springs, visit its old Catholic holy sites, you can at least catch an echo of a different kind of spirituality. I can’t quite follow him off to the edge of mysticism, but I can at least understand how he gets there. The thinking is part of the journey.

With Dyer, so dissimilar from McIntosh as to be almost another species, it’s the sardonicism. In White Sands, he and his wife pick up a hitcher near a prison on the way to El Paso, a dangerous-looking guy who doesn’t want to leave the car. He’s just been ditched by his girlfriend, he says, and he starts talking about his life. Dyer almost falls asleep listening to him. “A few minutes earlier,” he writes, “I was worried that he might be a murderer; now I was worried that he might be a bore, but it was possible he was a murderer and a bore.” I won’t tell you how it ends, though it’s fair to say that mysticism isn’t involved. But whether you like your pilgrimages sacred (McIntosh) or profane (Dyer), at least this month you get a choice. 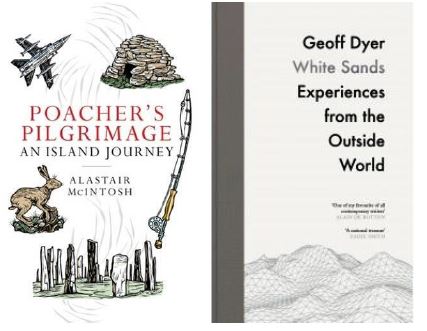 David Robinson is a freelance journalist and editor and from 2000-2015 he was books editor of The Scotsman. This year David is convener of the Saltire Society’s Literary Awards panel.

Poetry from the Iona Community

‘Cut deep into the earth – a firm track, going somewhere’