Helen Sedgwick explains the genesis of this unique short story: Several years before I wrote The Comet Seekers, I wrote a short story composed of independent flash fictions in which the characters were linked through a connection to the comets in the sky overhead. The resulting story, called ‘Searching For Comets’, was completed in 2011 (and published in Tramway’s Algebra) but over the years I kept feeling myself pulled back into it. When an idea keeps calling like that, I find I have to listen! So here it is, the short story of flash fictions that became a novel – I hope you enjoy reading it.

Searching for Comets
By Helen Sedgwick 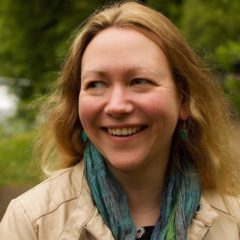 There is a falling star unlike any of the stars that have fallen before. It was predicted, and sometimes predictions can come true. Twelve women scramble up the hillside overlooking Aegospotami, their wild hair streaming out behind them as they run. Their dresses are white linen, tied around their waists with finely twisted rope and their jewellery is amethyst and gold, emerald and polished mother of pearl. In Athens, a philosopher is writing about the comet that lights up the night, but on the hilltop the women let their dresses slip off so that they can dance and sing. They feel mud between their toes and touch skin with their fingertips, they sing to the gods and they sing about the comet of Anaxagoras; they sing to the falling star that is different from all the others, then they dance with spiraling arms and the urgency of freedom and

like many Brittany farmers, he is proud and stubborn; a solitary man. Where his fields lie empty he can remember herds of cattle. His farmhouse is crumbling. He rubs the walls with his fingertips and feels his skin soften where the stone flakes away, but he can remember when it meant safety and permanence and everything that should come with a home. He remembers camping out in the fields to watch Comet West pass by with his cousin – cousin by blood, but more like a sister really, more like a best friend. He remembers asking her if the comet was a falling star and how much he liked her reply: that it was more like a dirty great snowball hurtling through time and space. He looks up to the sky in his empty field and focuses his eyes on this year’s comet and presses his shotgun into the roof of his mouth and pulls the trigger. An instant before his brain bursts from his skull with shattering violence, he remembers his cousin and thinks that he should visit; turn up on her doorstep and ring the bell and tell her that she is remembered, that she is

alone on the balcony with the music pounding in her heart, in her stomach, and tequila scraping down her throat. But not for long. Soon there’s a hey, soon there’s a need another one of those? and a fumbling in the dark, an awkward meeting of lips becoming a salivary kiss with a man who tastes like Guinness and looks like Simon Pegg. Below them everyone is dancing, jumping to the beat that turns into an alarm but at first they don’t realize; only when the music stops and the alarm keeps ringing do people start pushing their way to the door. She’s caught in the crowd, pulse racing with panic until, outside on the street she stops still and looks. She looks at the flames licking across the rooftops, and past the flames to the comet that she’d forgotten about, that she had been meaning to look for but hadn’t yet made the time to see. And thanks to the arsonist or the smoker or the electrical fault that sparked the fire she sees the spectacular flame-blue colour of the comet’s coma, she sees its luminous tail streaming out behind and she catches her breath, thinks my God, what if I had missed this – this comet flying through the solar system like

an arrow; the shock of an arrow piercing his skin as it forces through his chain mail hauberk. His shield hangs uselessly to the ground and his arm buckles, surrendering to the pain that paralyses his right side. It feels as though the battle has lasted forever, and he has forgotten why they were fighting, or whom they were fighting, or what they were hoping to win. He lets his knees give way to the weight of his body and slumps forwards, as if in prayer. Whoever shot him has moved on, or perhaps hasn’t noticed that his arrow found its mark, but the man doesn’t mind – he too has fired many an arrow with no knowledge of its destination. His head rolls back and he is about to close his eyes when he sees something extraordinary above him; he sees a bright star with a trail of glowing light behind it. He doesn’t imagine for a second that others have seen it, that it might be remembered for centuries and recorded in thread and gold. Instead, he thinks it is a personal star, promising a life after the one he knows he’s losing, and he smiles at the glorious sight and he forgives

the smell of rotting food and urine. It seeps up from the street, and the women lift their skirts a few inches from the ground. They don’t want to be here in this odious place but they have no choice; the sky is going to fall, and they are afraid. They tiptoe over dirt and stagnant fluid, follow winding alleyways to the marketplace where they know they’ll find him. On his stall, gas masks are spread out like gawping faces. Goggle-eyes bulge and mouthpieces grimace. Beside them, pill bottles and coloured liquids in glass decanters are lined up: for protection, for good health, to purify bile and blood. It seems old fashioned, but then he explains about the toxic cyanogen that will impregnate the atmosphere when the comets come. The pills will keep them healthy for now, he says, but the gas masks will keep them breathing no matter what falls from the sky. They start to believe him. It is the twentieth century, after all, and who knows what’s going to happen? One by one they buy, and the more they buy the better they feel, content in the knowledge that they’ll be prepared. They will survive this

portent – that’s what the oracle says. The bright light moving across the sky with a tail of glowing fire is a portent, and at the end of the light’s journey his enemies will have the throne of Rome. Nero thinks of killing the oracle but decides instead to murder every eminent man of state, to take their wives, or kill them if they won’t be taken, and to offer their children death by poison or starvation. It’s not enough. He thinks of new ways to dominate. He keeps boys in his bed and naked women chained to his walls like statues. At night, he lights his garden by setting fire to prisoners and, watching from his rooms above, he enjoys the glow. He develops quite a taste for killing – besides, the portents keep coming; year after year he can see them in the sky – and he forgets how many he has killed but he can taste the blood in his soup, in the embers of the burning buildings of Rome, and in the seconds before his death by his own hand he thinks: the portent foretold my death, and now my death is here, where

she positions her telescope to point out of the Velux window. As expected, the clouds spill into her field of view, and she waits for the sky to clear. She hears a fox howl in the street downstairs, feels a chill and thinks that it’s a good sign – clear skies are partnered with the cold. She remembers that visit to the Bayeux tapestry with her cousin when she was young – her cousin by blood but more her brother, really. Almost her best friend. She remembers him asking why he couldn’t see all the stars at once, and her reply that we can only see the bits of sky that lie above our own horizon. From her attic window she sees a sliver of moon revealed between the clouds. They are not daytime-clouds, more like swirls of fog, a silvery mist above her that is clearing. She is awed by the sky; she always has been. She checks the time. There is not long left before sunrise. She feels goose bumps rise up on her arms and she knows that it has to be now, so she holds her breath as the clouds begin to part. Then, through the eye of the telescope, she sees the red gold plumes of light emitted by Shoemaker-Levy 9 as it bursts through the atmosphere of Jupiter with shattering violence, and her ribs feel like they might break and when her doorbell rings

the applause begins. In the audience, the old man feels a little embarrassed by his show of emotion; part of him wishes he were sitting quietly with his family in Morningside. He tries to imagine the sub-atomic particle, his sub-atomic particle, because really, even now, that is what he has to do, despite the graphs and equations and years of believing in things that cannot be seen. His thoughts circle down through molecules and atoms and empty space, to colliding streams of protons moving close to the speed of light – they are still clapping – and then up, through planets and stars and empty space, to comet Machholz 1 flying closer and ever closer to the sun. And for a second he feels like he can see all the things that cannot be seen, because he believes that they have found the proof they have all been searching for, until

they scramble to the top of Blackford Hill, all finger-nail mud and grass-stain knees and at the top they fall together on the bracken for skin-prickling. Below them city blocks rise high, their rooftop gardens patterned with people, but here they are alone, the only ones to have scaled the padlocked gates tonight. They peel off their coats, kick off their shoes and throw keys and mobiles carelessly to the ground. He’s got slow kisses, but already she can feel his eyes looking past her and she wants to do that, too – she wants to see something more than this. Then, as if he knows what she’s thinking, they roll apart to lie on their backs and look not at the bracken or the bench or the tracks on the dirt or the sprawling merger of the cities of Scotland, but up to the comets as they disintegrate overhead. They fracture and they split and burst, creating more bodies, more parts of themselves and it is beautiful – a shower of light, here, in this quiet corner of the spiral arm of the galaxy.

The Comet Seekers by Helen Sedgwick is out now (HB, £12.99) published by Harvill Secker.