In this powerful memoir, Uuganna Ramsay deftly addresses and challenges multiple prejudices. In this extract we are given insight into Uuganaa’s nomadic childhood when she lived in a one-room ger – or yurt – in the remote western reaches of Outer Mongolia.

Extract from Mongol
By Uuganaa Ramsay
Published by Saraband Books

Until my sister Zaya was born in 1984, I was an only child growing up in Uliastai, in the western reaches of Outer Mongolia. Both of my parents came from large families, with nine and eight brothers and sisters apiece, which meant that Zaya and I had seventeen aunts and uncles, not to mention their wives and husbands. Because I was a first grandchild for my paternal and maternal grandparents, all of those aunts and uncles spoilt me rotten.

Our traditional Mongolian house, known mostly in the West by its Russian name of ‘yurt’, was called a ger: portable, felt-covered, wooden-framed and circular. I later came to realise that while my parents moved around a fair bit in my childhood, the good thing about living in a ger is that wherever you go it’s still the same house, the same home. Beyond that our ger was special: not many were decorated as ours was. I loved waking up to the beautifully hand-painted support poles and above them the round toono, the single window at the top of the ger. Like the wooden poles, two columns and the toono frame were also hand-painted. There was something else, too: my paternal grandparents had seven boys and a girl, of whom my dad is the eldest; and grandfather told us that the beautiful big rug in the middle of our ger was bought by my grandparents when Dad was only 15.

Our home was also full of photos of me that had been enlarged in Russia, where my uncles and aunts had studied. This was during the socialist era of worshipping our Russian ‘brothers’ for helping us to rebuild a country and people that had for centuries struggled for independence from the Qing Dynasty of China. I dreamt of going abroad where you could get chewing gum, which was then a rare treat in rural Mongolia. My long ash-brown hair (fairer than usual for Mongolian children) meant that if any of my friends felt like teasing me they would call me ‘Russian’ or ‘a cat’ as an insult. Mongolians don’t like cats. It’s a superstition thing; they see dogs as honest and good friends to humans. But thanks to my uncles and aunts I was one of the trendiest children in town wherever I went, showing off my colourful Russian dresses and pretty ribbons.

Some of my happiest childhood hours were spent at an old desk, rescued from the school where my mum worked and now squeezed into our single-room home that already contained two metal beds, six beautifully decorated chests, a matching wardrobe, a yellow bookcase and a red kitchen cupboard arranged all around the wall. I felt very important doing my homework at that desk, with my schoolbooks and drawing implements. I even tried to make my own space by stitching a Russian poster of Lenin ‘Bypassing Capitalism’ to the wall hanging, beside the black German lamp that Father had brought back from Berlin in 1980. He was a vet, and had attended a professional development course in East Germany. I remember him bringing beautiful yellow leather boots for me and a television labelled ‘Wesna’ from Moscow, on his trip back. The television was a great attraction to my uncles and aunts and after meal times in the evenings our ger became something of a cinema.

Until the mid-80s we had only Russian programmes to watch – with my dad mostly interpreting for us – and I was so embarrassed at the sight of a man and woman kissing that I pretended to be reading or doing something else. Russian culture was much more open than ours. When Mongolian broadcasting reached into the rural areas, it was a great feeling to watch our people speaking their own language and playing our music. Those early programmes were taped and brought to our town by plane as it was impossible to broadcast to the whole country at the same time. Broadcasting via the Asiasat satellite was still to come in the 1990s. We watched the news and everything else three days later than Ulaanbaatar, the country’s capital. But our programmes were more restrained than the Russian ones, so I no longer had to hide my embarrassment.

My desk area was perfect for me to ignore what was going on behind me and get into whatever I was doing after my household chores. Reading became a passion, and my favourites were novels and short stories. My parents told me that I ‘lost my ears’ when I read. They had to come and physically close the book to get my attention. One night, I nearly burnt the ger down trying to finish a book. The lamp was too close to my dad’s radio and its glass front melted from the side. This led my parents to ban me from reading anything other than schoolbooks. I had to learn to switch off from the outside noise when concentrating on my studies. There were no other rooms where you could go. The ger has just one room, serving as bedroom, kitchen, living room, dining room, study room and just about any other room you would know in the West.

So it was useful to learn to concentrate on my studies when my parents were chatting to each other, my sister was toddling around, the TV was on and most of the time we had other relatives or friends dropping by. The ger has a stove right in the middle; as you enter it is facing towards the right side, and the chimney faces the opposite side, where the guests are normally seated. In some rare cases it is reversed in order to divert the evil spirits, which might happen if, for example, a family had been trying to have a baby without success.

In my carefully arranged office area I began to write poems and short stories. My first poems were titled ‘My Dad’s Work’ and ‘Teacher Lenin’. Even when I was very young my parents had great expectations for me. My mum was a teacher of Mongolian and Literature and our house was full of books. She used to read me stories whenever she could. Sometimes I would ask Dad for a story and he would start with: ‘Once upon a time there was a little bird looking for a nest. He decided to build a nest for himself and started carrying a piece of grass from far, far away.’ Then Father would stop. A few minutes later, I would ask, ‘How about now?’ He would say, ‘Still collecting more.’ Eventually, a few years later I was fed up with his usual response of ‘Still collecting more’, so I said, ‘Please finish the story when I’m older and driving a Volga in Leningrad.’ Of course, he was happy with that and probably relieved that a nagging child stopped asking for a story to which he did not yet know the ending himself!

Mongol by Uuganaa Ramsay is out now published by Saraband Books priced £8.99. You can read another excerpt from the book here and listen to Uuganaa’s ‘The Meaning of Mongol’ on BBC iPlayer here. 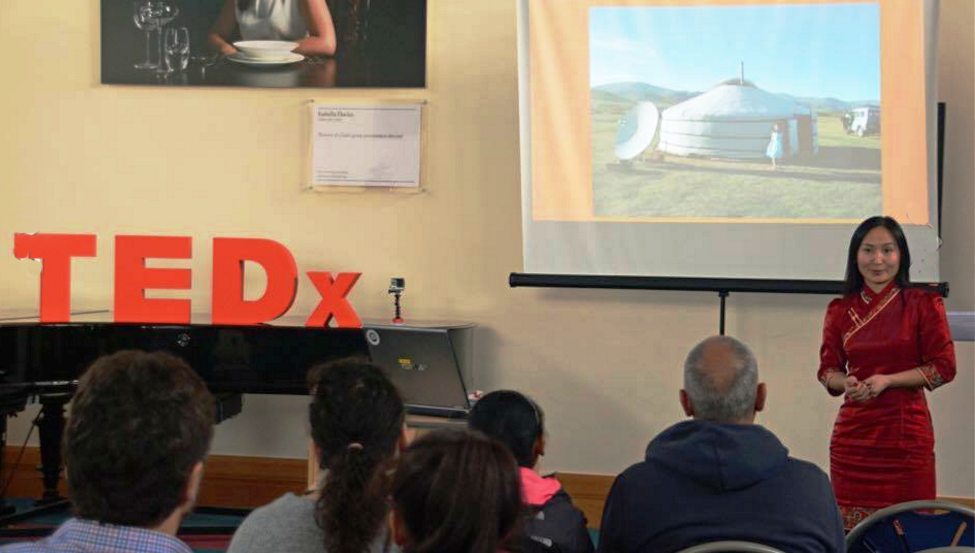