PART OF THE The Scottish BAME Writers Network Takeover ISSUE

‘I’d begun to see I could bring those stories with me into my present and my future self.’

We continue our ‘Introducing . . .’ series, where BooksfromScotland highlight the work of up-and-coming writers, with this essay from Zebib K. A.

A Symptom of Migration: Your Children will be Traitors to your Nostalgia
By Zebib K. A.

By age 6, I knew what nostalgia meant, and it already felt like a dirty word. Nostalgia was a lecture about old Africa, how things were better back then and there, yet again. Nostalgia was guilt and irritation, especially to a child trying to have fun. I wanted my own knickknacks, hoarded precious things, memories, risky adventures. We were supposed to feel nostalgic for a country we could not miss.

My parents grew up in our homeland, Eritrea, East Africa. They would still be there, we would have been born there, they say, if it was not for the War. The 30-year civil war, the War, drove my parents out of East Africa, out and away to America. They fled, one briefly imprisoned, one living in Sudan, but eventually won political asylum, settling in a city called Baltimore in America in the 1980s. My older sister was left behind with our grandparents, another conundrum of displacement.

I was born in America, felt American, and also felt acutely conscious of the splits in my identity. My parents never ceased to remind us where we came from. I often felt like a traitor to everything my parents stood for, held sacred.

My childhood memories mixed with the secondhand memories of Eritrea, my parents’ former lives, filling up my brain, my dreamscape. Our entire childhoods were reminiscences, our parents trying to impress us with the golden dappled haze of our origin. The projector reel of the past was always playing. We were honored young guests at nightly performances of soliloquies about our land before time. We heard tales of schoolyard fights, football injuries, a secretly cruel emperor, Addis Ababa in 1970. Ancestral spirits backed up lectures on filial piety. We wondered if these things had really happened. Maybe they were fables, myths.

We did not believe what they believed. We sang America, we were born on American soil. We sang odes to individualism, American girl dolls, Saturday morning cartoons, McDonald’s ice cream. As a child, I obsessed over medieval fantasy novels and Sabrina the Teenage Witch. As a teenager, I dreamt of visiting Scottish castles. I was a movie buff, an American pop culture fiend. I was struggling to come to terms with my queerness, my blackness, and endlessly struggling between self-acceptance and my conservative parents’ values. I rolled my eyes when we heard their old stories, to cover the confusion those stories brought up in me.

‘This country is a damn melting pot…a stew. We will disappear here.’ We were not really settled, but rather walking in a slow oblong path, a boomerang ellipse back to where we came from, sometime, someday.

I went to Eritrea for the first time, rode a plane for the first time, at age 8. My small body had never traveled so far. Exiting the small African airport at midnight, I saw the terrain was full of broken cement and mud, and tasted the atmosphere, smoky diesel. The dusty red surface of Mars, or like the red blood of Eritrean martyrs, red like Twizzlers. Our capital city was as beautiful as my Dad said, and more run-down, almost ruined. Asmara, an old world, art deco, abandoned colonial outpost. How small. Everywhere, in every corner, I saw oddly familiar streets, gas stations built like 1950s versions of spaceships, crumbling movie theaters with faded white façades. Villas, roosters, markets, incense-filled churches, mosques.

The past was bruises of orchid purple, pale blanched yellow, vibrant ink blue on brown skin, a history that bruised with expectation and guilt at our own family’s displacement. The condemnations of parents, even their praises, held a test. Do you remember the motherland?

Growing older, my self-realizations felt like selfishness. To be myself, I might just be desecrating, defiling, perverting everything that came before. Was I flying as a destroyer into the blaze of America? Burning down our museums and our treasures, for something new, anything new. Since the dawn of time, our ancestors had been born, had children, died, on our land, until us, a long unbroken chain. Our parents saw this chain as a precious rope tethering us to earth.

We were meant to believe in the idea of Eritrea more than we believed in our own existence. We came here because we had to, because we were escaping bodily harm, because we thought the streets were paved with gold. Could I have my own idea of Eritrea, of the homeland?

Nostalgia had been irritating, guilt-inducing for a child caught up in her own imaginings, but as an adult, I’d become curious about this feeling. Did I still have the time to find my own country, my own version of that place? The capital was no longer the same, not just crumbling but weary, and migrants poured out of the country in droves, dying in boats in the sea. It’s no longer the land my parents yearn for. I had the urge to capture all of their stories, secretly record my parents talking on my phone. I was not sure I could retell the stories myself.

I’d begun to see I could bring those stories with me into my present and my future self.

Like Dad talking about visiting his grandfather in the village. He claims he can remember it, even age 2, sneaking onto the last bus of the day. On the outskirts of the capital, in the country hills at night in 1947, there were only the deepest depths of blackness, the only light a thousand African stars and a red moon. In the dark of night, Dad rubbed his grandfather’s feet, pulled at his rough toes, cracked the old man’s toe joints to oozy relief. Dad was a child, once, how strange.

There were so many memories:

The love note my mother passed from a boy to her best friend, written in English: ‘Love may be blind, but my love has two ELECTRIC eyes!’.

The nights studying in attics lit by kerosene lamps.

The promenades down Asmara streets in mini-skirts and three-piece suits.

Nostalgia still contained too much, too much weight, and too much depth, but I have been contemplating the feeling differently for some time now.

The deep warm waters of my species called. On weathered papyrus rolled out, across a whole wall, was the absurdist family map of our world. Seas and lands were all abstractions, misshapen and blown up, not to scale. A ‘You are here’ red dot on the eastern coast of the mass of North America. America, the shaded amorphous rectangular blob, huge, dotted with gold foil cutouts of coins, silver paper cartoon wolves. The Red Sea of Truth and Righteousness, near the pointy pinky tip of the Horn of Africa. A collection of dark waterways known as the Channels of Migrations. Ciao! Arrows, so many arrows across the globe, all pointing, all spread across like a burn, sailing and ripping across the map, from The Homeland to The Wild West. Out of the land Eritrean apparitions had gone. 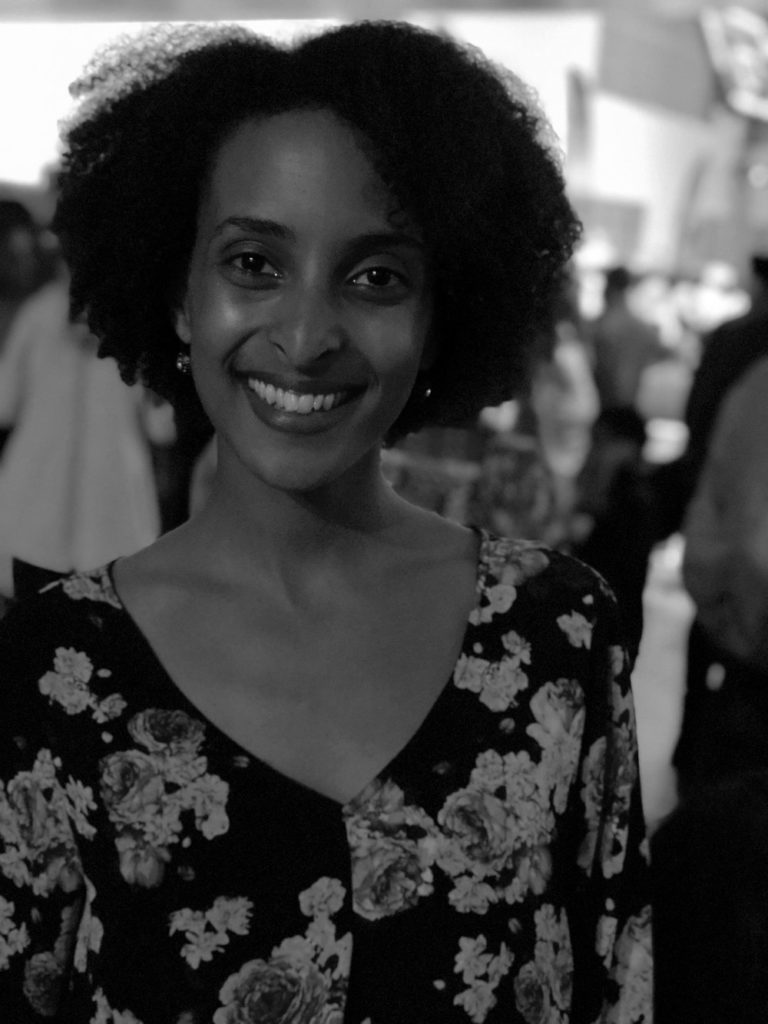 Zebib K. A. (she/her) is a writer and psychiatrist. She recently moved from NYC to Scotland to do a Masters in Creative Writing at University of Edinburgh. She has been published in The Rumpus, Apparition Lit, and more. She is black, queer, and comes from an immigrant background, and explores these identities in her writing. She can be found at https://medium.com/@pegasusunder, Instagram: @pegasusunder, Twitter: @pegasusunder1

This essay was first published in Midnight & Indigo: https://www.midnightandindigo.com/symptom-of-migration/)

‘He put all of my old sketch books into the black bag. I felt like my hard work had been truly trash …

‘Jay Wright is a poet in habitual movement from one place of residence to another.’