PART OF THE Departure Lounge ISSUE

‘That evening, tucked into his tiny bunk, he thought again about the face. The bony head, and the teeth, so sharp. And the eyes… He woke in the dark with a start. Then he laughed to himself at his imagination, and went back to sleep.’

It’s time for the children’s adventures to continue, with a brand new series, Dragon Storm, by Alastair Chisholm. So excited he is to share these adventures with you, he will be releasing the first and second books in the series simultaneously! Here, though, we introduce you to Tom, who helps his dad make swords in his forge. But an adventure is brewing. . .

Look out too for Dragon Storm: Cara and Silverthief
By Alastair Chisholm
Published by Nosy Crow

The forge had cooled, but after the chilly winter air outside it still seemed incredibly hot. Dad brought the swords down from the rack. They didn’t have handles yet, and they were black, with rough edges. Tom and Dad got to work.

Dad added the handles, and Tom sharpened the blades with a special grinding stone that spat sparks, scraping away the rough edges until the swords were smooth and sharp. The metal had a strange, swirling pattern, like oil. Dad said it was because of the secret ingredients he mixed into the ore, making them not just swords, but dragonswords, able to cut through a dragon’s hide.

Tom placed each sword carefully back on the rack. But as he reached for the last one, he glanced at the forge – and gasped!

There was a face in the fire!

A long face hung in the flames like a shadow, dark and shimmering. It wasn’t human; it was longer, and bony, with a crest at the top of its head, and its eyes were two circles of fire.

Tom gazed at it as if in a dream. The eyes burned! Its mouth opened and showed rows of sharp, vicious teeth. 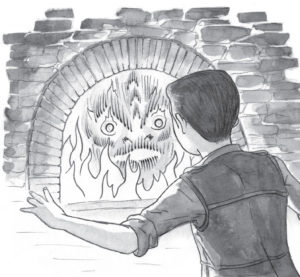 Tom blinked and looked up. Dad was frowning at him.

‘I-I thought…’ Tom peered into the fiery forge, but there was nothing there. ‘I thought I saw something,’ he muttered.

Tom nodded, and they went in for supper.

That evening, tucked into his tiny bunk, he thought again about the face. The bony head, and the teeth, so sharp. And the eyes…

He woke in the dark with a start. Then he laughed to himself at his imagination, and went back to sleep.

They finished the last sword the next morning. Tom checked the flames several times, but today there was nothing – just crackling wood and white-hot charcoal.

He held up the sword, watching it glitter.

They packed them into crates by the doorway. But as Dad left, Tom looked again at the fire – and the face was there! Unmistakable, dark and fierce, with eyes of flame…

Dragon Storm: Tomas and Ironskin and Dragon Storm: Cara and Silverthief by Alastair Chisholm are published by Nosy Crow, priced £6.99.

At Least This I Know

‘All around us, the future feels bright and never-ending.’

‘The memories came flooding back with such intensity that she was rendered breathless. Closing her m …