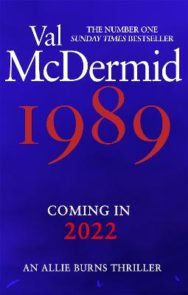 Home > Fiction from Scotland > 1989: The brand-new thriller from the No.1 bestseller

1989: The brand-new thriller from the No.1 bestseller

THE SECOND THRILLING NOVEL IN VAL MCDERMID’S NEW SUNDAY TIMES BESTSELLING SERIESIt’s 1989 and Allie Burns is back.Older and maybe wiser, she’s running the northern news operation of the Sunday Globe, chafing at losing her role in investigative journalism and at the descent into the gutter of the UK tabloid media.But there’s plenty to keep her occupied. The year begins with the memorial service to the victims of the bombing of Pan Am Flight 103, but Allie has barely filed her copy when she stumbles over a story about HIV/AIDS that will shock her into a major change of direction.The world of newspapers is undergoing a revolution, there’s skulduggery in the medical research labs and there are seismic rumblings behind the Iron Curtain. When kidnap and murder are added to this potent mix, Allie is forced to question all her old certainties.Praise for 1979’McDermid is at her considerable best’ GUARDIAN’Irresistible’ PATRICIA CORNWELL’A brilliant novel by a supremo of the genre’ PETER JAMES’Outstanding’ SPECTATOR’Another masterpiece’ DAVID BALDACCI’Sensational. One of Britain’s most accomplished writers’ SUNDAY EXPRESS

Reviews of 1989: The brand-new thriller from the No.1 bestseller

Praise for 1979 * – * The Queen of Crime has done it again . . . Irresistible — Patricia Cornwell McDermid is at her considerable best here * Guardian * A supremo of the genre at the height of her powers . . . An unmissable new series — Peter James Allie is a fabulous character, I'll go wherever she takes me and I'm dying to see what she does next — Marian Keyes McDermid can do edge-of-seat suspense better than most novelists . . . An excellent opener to what promises to be an outstanding series * Spectator * A tour-de-force . . . The Queen of Crime has delivered another masterpiece — David Baldacci Packed full of Val McDermid's trademark brilliance, 1979 is a thrilling snapshot of a fascinating era — Jane Harper While "gripping" is an adjective over-used in book reviews, it's a fitting description of a sensational novel. A surefire bestseller from one of Britain's most accomplished writers * Sunday Express * A nail-biting new series * Observer * Allie Burns is off to a flying start, and well worth following down the decades * Scotsman * A new series from Val McDermid promises to be an event – and 1979 delivers . . . A marvellous new character to follow through the years to come — Mick Herron

Val McDermid is a number one bestseller whose novels have been translated into forty languages, and have sold over seventeen million copies. She has won many awards internationally, including the CWA Gold Dagger for best crime novel of the year and the LA Times Book of the Year Award. She was inducted into the ITV3 Crime Thriller Awards Hall of Fame in 2009, was the recipient of the CWA Cartier Diamond Dagger in 2010 and received the Lambda Literary Foundation Pioneer Award in 2011.In 2016, Val received the Outstanding Contribution to Crime Fiction Award at the Theakston Old Peculier Crime Writing Festival and in 2017 received the DIVA Literary Prize for Crime, and was elected a Fellow of both the Royal Society of Literature and the Royal Society of Edinburgh. Val has served as a judge for the Women’s Prize for Fiction and the Man Booker Prize, and was Chair of the Wellcome Book Prize in 2017. She is the recipient of six honorary doctorates, is an Honorary Fellow of St Hilda’s College, Oxford and a Professor at the University of Otago in New Zealand. She writes full time and divides her time between Edinburgh and East Neuk of Fife.