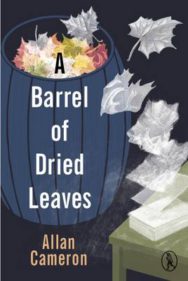 A Barrel of Dried Leaves

“A barrel not of laughs but of contortions, confusions and the occasional dry chortle – and of metre adorned with irregular, sometimes internal rhymes, assonances, alliterations, awkwardnesses and other such trickery unfashionable to the current academic ear, and not a murmur of the poet’s inner angst, failed loves or fortitude.” This second collection Cameron’s poetry contains a wide variety of subjects, not all of which are commonly associated with poetry: a weak man is interviewed by angelsand devils, an Afghan mystic tell us why he became on e, a riposte to Scott’s “Breathes there a man with soul so dead”, taking the side of the man with a dead soul, the English language, a lesson on Italian viticulture, and another on Italian anatomy amongst others.

Allan Cameron was born in 1952 and grew up in Nigeria and Bangladesh, and lived as a young adult in Italy. He has written two novels, The Golden Menagerie (Luath Press, 2004), partly based on Apuleius’ The Golden Ass but also a polemic against it, and The Berlusconi Bonus (Luath Press 2005), a political satire principally directed at Western consumerism, the policies of Bush and Blair, and Fukuyama’s now disowned victory song of American capitalism. His non-fiction work, In Praise of the Garrulous(2008 and 2013), is an examination of the essentiality of language to human nature. His two collections of short stories, Can the Gods Cry? and On the Heroism of Mortals were published in 2011 and 2012. Over the years, he has translated twenty-four books, and his first collection of poetry, Presbyopia, was published in 2009.