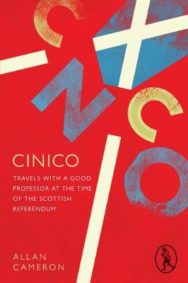 Home > Fiction from Scotland > Cinico: Travels with a Good Professor at the Time of the Scottish Referendum

Cinico: Travels with a Good Professor at the Time of the Scottish Referendum

The narrator is an urbane, cynical and egocentric Italian journalist with little interest in the truth, though not as shabby as his companion, a professor of politics. The journalist meets people across the spectrum of ideas, and the book concerns not just political events, but how people interrelate within a social context, Scotland’s place in Europe and how Europeans interpret each other. The Italian encounters a range of Europeans: a Ukrainian nationalist, a Russian religious guru, an eccentric Estonian, an Algerian refugee, a Lithuanian, a dying man and many Scots from different walks of life. The narrator falls in love with a Scottish campaigner. Beneath the urbane veneer, he’s a complex mix of the old-fashioned and the fashionable, and the relationship soon encounters problems. The Italian, like Voltaire’s Candide, starts with a mindset incapable of bringing him either understanding or lasting contentment, and ends the book with some understanding and awareness, insufficient for the elusive happiness we all seek but sufficient for a perfectly acceptable human existence.

Allan Cameron was born in 1952, grew up in Nigeria and Bangladesh, and lived as a young adult in Italy. He has written two novels, The Golden Menagerie (Luath Press, 2004), partly based on Apuleius’ The Golden Ass but also a polemic against it, and The Berlusconi Bonus (Luath Press 2005), a political satire principally directed at Western consumerism, the policies of Bush and Blair, and Fukuyama’s now disowned victory song of American capitalism. His non-fiction work, In Praise of the Garrulous(2008 and 2013), is an examination of the essentiality of language to human nature. His two collections of short stories, Can the Gods Cry? and On the Heroism of Mortals were published in 2011 and 2012. Over the years, he has translated twenty-four books, and his two collections of poetry, Presbyopia and A Barrel of Dried Leaves were published in 2009 and 2016.