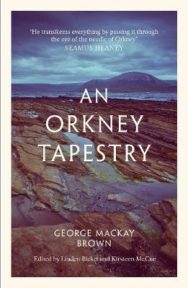 A unique look at Orkney through a poet’s eye, An Orkney Tapestry is a celebration of its people, language and place. It is not written as a continuous historical narrative but as a pattern of history, legend and folklore. Beautifully illustrated throughout by Sylvia Wishart – a fellow Orcadian – they show what has been won and lost in Orkney over the centuries.Chapters discuss modern Orkney; Rackwick: the development and decline of an island community, a microcosm of Orkney life; Vikings: a study of three great Vikings: Earl Sigurd; Said Magnus and Martyr, and Earl Rognvald the Crusader; Poets: a ballad maker and Robert Rendall, an Orkney poet; Midwinter Music and Midsummer Music: two chapters on folklore and communal art and poetry.