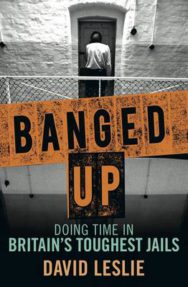 The wartime double agent with a transmitter in his cell to contact suffragettes; the doctor hanged as he smiled to the farewells of lovers on the scaffold; the con who defied a gangland godfather and escaped the bromide in the prison tea; aristocrats and arsonists…The screws who guard Britain’s prisons have seen them all. Stir! is the story of six of the country’s most notorious jails – Durham, Wandsworth, Pentonville, Wormwood Scrubs, Dartmoor and Holloway – and of the men and women who entered their gates, sometimes stood on their scaffolds and occasionally vanished before their time. The book looks at early punishments, life on hell ships transporting convicts to far-off continents, the growth of prison populations, inmates sentenced to waste away on treadmills, the underworld giant who was birched, children starved and beaten for stealing, and even women forced to eat. Also investigated are the lives and thoughts of scores of inmates, from Oscar Wilde to Oswald Mosley; from Dr Crippen to Ruth Ellis, the last woman hanged; from underworld legend Frankie Fraser to a Rolling Stone; and even the man who shot Martin Luther King, Jr.Just like Ronnie Barker’s Porridge series, there are laughs too, as we uncover the man who measured bathwater, the prisoners punished for not wearing a collar and tie, the jail bookie who paid out in bread, and the unlucky brewers. The mix is all there in Stir!

David Leslie was a senior journalist with the News of the World for over forty years, latterly as Scottish Crime Editor. He is the author of several books including Crimelord, the story of underworld supremo Tam ‘The Licensee’ McGraw, and The Happy Dust Gang, telling how businessmen plotted the start of major cocaine smuggling. He has appeared in television documentaries giving unique insights into notorious crimes and criminals and is a regular contributor to radio stations and newspapers, drawing on his extensive and unchallenged knowledge of the Scottish underworld.