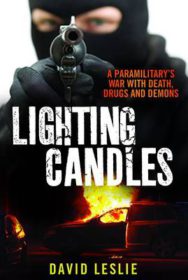 Lighting candles: A Paramilitary’s War with Death, Drugs and Demons

When Manny McDonnell was twelve he awoke to discover British troops surrounding his home in the toughest area of trouble-torn Belfast. Internment had begun and, encouraged by a fiercely Republican mother, he took to the streets with other school kids, throwing bricks, bottles and petrol bombs at soldiers. Jailed at fifteen for having IRA links, he became a unit commander leading deadly missions for the INLA before joining the IPLO, a group so vicious even the IRA ordered it to disband. But his decades of commitment to a free united Ireland turned to disillusion when bombs killed two little boys. By then he was a regular visitor to Scotland, where he befriended major gangland player Paul Ferris and then became the right-hand man of Tam ‘The Licensee’ McGraw. This remarkable, colourful account of one man’s nightmare journey through blood, bombs, bullets and smuggling is a mix of tragedy, fear and humour and is a unique insight into the world of major crime. It includes stories telling how police unwittingly helped car bombers; a terrifying brush with the deadly Shankhill Butchers; the businessmen who made fortunes investing in drugs; hunting a child killer and a host more.It is also the story of how it is possible to put the past behind you and begin a brand new chapter.

David Leslie was a senior journalist with the News of the World for over forty years, latterly as Scottish Crime Editor. He is the author of several books including Crimelord, the story of underworld supremo Tam ‘The Licensee’ McGraw, and The Happy Dust Gang, telling how businessmen plotted the start of major cocaine smuggling. He has appeared in television documentaries giving unique insights into notorious crimes and criminals and is a regular contributor to radio stations and newspapers, drawing on his extensive and unchallenged knowledge of the Scottish underworld.