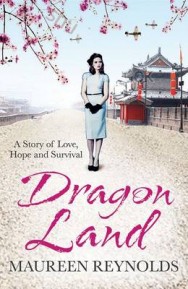 Lizzie Flint learns things a ten-year-old shouldn’t know. During WWI, she learns that her father, Peter, is missing in action, that she and her mother will have to live with her grandmother until he is found and that her mother, Beth, refuses to believe him dead. She learns that her father was a hero, saving other soldier’s lives but was finally blown up by a land mine and, ultimately, that Beth will never recover from hearing the news. Grown, Lizzie develops an adventurous streak. She travels to Hong Kong to take up a teaching post. There, she meets and falls in love with an author, Jonas O’Neill. They marry but Jonas is sent to Shanghai to report on the Japanese bombings and the two are separated. Not knowing the fate of the other, Lizzie frantically searches for Jonas, all the while fearing that, just like her father, she may never see Jonas again. Dragon Land is an epic story set across generations of the Flint family as they battle war and conflict throughout the world as the Great War, the Japanese invasion of China and finally the Second Word War rage on around them and rips the family apart. It is a story of love, hope and survival.

Born in Dundee Maureen Reynolds lived with her mother, grandad and brother in two rooms on Macdonald Street. She left school at fifteen and has held a variety of jobs. Married in 1956, she now lives in Perthshire and has four children and seven grandchildren. She is the author or numerous bestselling books including The Sunday Girls trilogy, Voices in the Street, McQueen’s Agency and A Private Sorrow.