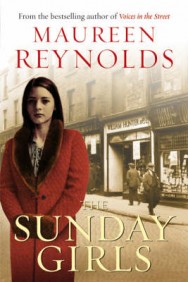 This is a moving family saga from the author of the bestselling “Voices in the Street”.It is the time of the Great Depression and jobs are scarce. Like many others in Dundee, the Neill family are struggling just to make ends meet. Ann would love to stay at school but, following the tragic death of her mother, she is forced to take a job as a housemaid to support her family. Her employer, Mrs Barrie, couldn’t be kinder but the spiteful housekeeper, Miss Hood, has a guilty secret and is determined to make Ann’s life a misery.Ann’s desperation to provide for her family keeps her going through hard times until she meets Maddie, the daughter of a prosperous Dundee solicitor. The only thing they seem to have in common is that they were both born on a Sunday but soon the girls become firm friends and discover that, despite these being the hardest of hard times, they can still find fun and laughter to help them through good times and bad.Following the runaway success of “Voices in the Street”, Maureen Reynold’s new trilogy starts with “The Sunday Girls”, a compelling story describing the trials and tribulations of working-class life, family and a close-knit community in pre-war Dundee.

Born in Dundee in 1938, Maureen lived with her mother, grandad and brother in two rooms on Macdonald Street as she grew up. She left school at fifteen and has held a variety of jobs; currently she works at her local garage. Married in 1956, she has four children and seven grandchildren. Her memoirs of growing up in Dundee, Voices in the Street, became a bestseller in 2006.