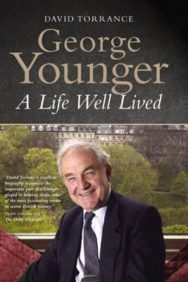 George Younger (1931-2003) was a senior figure in Scottish and UK public life for several decades. A product of the famous brewing dynasty, his career straddled three different walks of life: the Army, politics and business. National Service in Korea was a formative experience and forged a lifelong association with the Argyll and Sutherland Highlanders; Younger later made his political mark with a campaign to ‘Save the Argylls’, while his appointment as Defence Secretary in 1986 found him in charge of the UK’s Armed Forces. But there were also setbacks. In 1963, he sacrificed a safe House of Commons seat so that Sir Alec Douglas-Home could return to Parliament as prime minister, and in 1976 he was sacked from the Conservative Shadow Cabinet by Margaret Thatcher. Yet in 1979, he was appointed Scottish Secretary, eventually becoming the longest continually-serving incumbent.Younger repackaged Thatcherism for sceptical Scots, helped manage the final phase of the Cold War at the Ministry of Defence, and guided both Mrs Thatcher’s leadership campaigns as her powers waned. But his political career did not, as Enoch Powell’s maxim dictated, end in failure.Instead, Younger interrupted it at a happy juncture and resigned from the Cabinet to become Chairman of the Royal Bank of Scotland, managing its transformation from a provincial High Street institution into the world’s fifth-largest banking group. Written with full access to private letters, political papers, diaries, and family members, “George Younger” reveals the man behind the affable public persona and offers new insights into Mrs Thatcher’s leadership, Conservative attitudes to Scottish devolution and the historic acquisition of NatWest by RBS. Above all, it charts a fascinating and varied life of committed service to Scotland and the UK.

David Torrance was born and brought up in Edinburgh and educated at Leith Academy, Aberdeen University and Cardiff University’s School of Journalism. He was formerly political reporter for STV and is now a freelance writer, journalist and broadcaster. He is the author of The Scottish Secretaries, which charts the trials and tribulations of the 40 men and one woman who have held the post since the position was resurrected by Lord Salisbury in 1885.