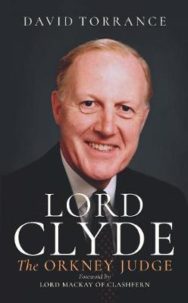 Born in Edinburgh in 1932, James John Clyde, The Rt Hon. the Lord Clyde of Briglands, was a judge with a distinguished career who made a major contribution to the building of modern public law across the United Kingdom.This biography charts James’s life, in which he initially aimed to replicate that of his father and grandfather, who both became Lord President, the most senior position in the Scottish legal profession. However, as his career unfolded, he carved a different path, chairing the Orkney Child Abuse Inquiry in 1991, being appointed a Law Lord in the House of Lords and overseeing the implementation of part of the Good Friday Agreement in Northern Ireland.Based on research among public and family records, as well as extensive interviews with those who knew Lord Clyde as both friend and colleague, acclaimed political biographer David Torrance paints a vivid picture of a remarkable man.

David Torrance was a journalist and broadcaster as well as the author and editor of more than a dozen books on Scottish politics and history. He completed a PhD in history and political science in 2017. Like all good Scotsmen, he lives in London, where he is a constitutional specialist at the House of Commons Library.