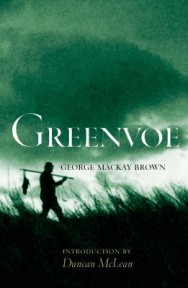 Greenvoe, the tight-knit community on the Orcadian island of Hellya, has existed unchanged for generations. However, a sinister military/industrial project, Operation Black Star, requires the island for unspecified purposes and threatens the islanders’ way of life. In this, his first novel (1972), George MacKay Brown recreates a week in the life of the island community as they come to terms with the destructiveness of Operation Black Star. A whole host of characters – The Skarf, failed fishermen and Marxist historian; Ivan Westray, boatman and dallier; pious creeler Samuel Whaness; drunken fishermen Bert Kerston; earth-mother Alice Voar, and meths-drinker Timmy Folster – are vividly brought to life in this sparkling mixture of prose and poetry. In the end Operation Black Star fails, but not before it has ruined the island. But the book ends on a note of hope as the islanders return to celebrate the ritual rebirth of Hellya.