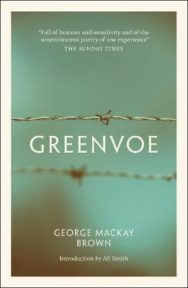 Greenvoe, the tight-knit community on the Orcadian island of Hellya, has existed unchanged for generations, but Operation Black Star requires the island for unspecified purposes and threatens the islanders’ way of life. A whole host of characters – The Skarf, failed fishermen and Marxist historian; Ivan Westray, boatman and dallier; pious creeler Samuel Whaness; drunken fishermen Bert Kerston; earth-mother Alice Voar, and meths-drinker Timmy Folster – are vividly brought to life in this sparkling mixture of prose and poetry.In the end Operation Black Star fails, but not before it has ruined the island; but the book ends on a note of hope as the islanders return to celebrate the ritual rebirth of Hellya.

'He transforms everything by passing it through the eye of the needle of Orkney' * Seamus Heaney * 'Brown is as connected to the world as any of us. He has retreated to a point where he can see the world in an internal reflection, a very clear and penetrating simplification that he could never have achieved in the midst of the hurly-burly' — Ted Hughes 'Fine delicate prose' * Publishers' Weekly * 'A precise, poetic and dazzling writer' * Guardian * 'a poetic, distinguished and totally delightful Orcadian story… full of humour and sensitivity and of the unsentimental poetry of raw experience' * Sunday Times *