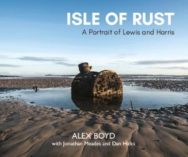 Home > Travel > Isle of Rust: A Portrait of Lewis and Harris

Isle of Rust: A Portrait of Lewis and Harris

“The unsurpassable strangeness of the island resides in the chasmic gulf between the naturally evolved and the negligently created, between Scarp and scrap, between the sublime and the substandard.” – Jonathan MeadesWriter, journalist and film-maker Jonathan Meades and photographer Alex Boyd present a unique exploration of ‘The Isle of Rust’, better known as Lewis and Harris.A decade on from Meades’ landmark series ‘Off Kilter’, described by The Telegraph as ‘a masterpiece’, Boyd returns to the island, spending two years documenting the stunning landscapes of the Outer Hebrides, a strange, sometimes rusty paradise.Alongside Meades’ insightful observations and explorations of the island, Boyd’s photography captures the rugged and austere beauty of the place, from the bays and mountains of Harris, to the moorland shacks of Lewis.

Alex Boyd is a photographer, curator and writer based in the west of Scotland. He lived in the Outer Hebrides until recently. His work has been widely exhibited internationally with solo exhibitions at the Scottish Parliament, as well as group exhibitions at the Royal Academy, Royal Ulster Academy and Royal Scottish Academy.His work is held in the collections of the National Galleries of Scotland, The Royal Photographic Society, the Royal Scottish Academy, the V&A, and the Yale Centre for British Art in the US.His first book, St. Kilda: The Silent Islands, was shortlisted for the Saltire Society First Book Award in 2018.Jonathan Meades is a writer, journalist, essayist, film-maker. His books include three works of fiction, and several anthologies including Museum Without Walls, which received 13 nominations as a book of the year in 2012. An Encyclopaedia of Myself won Best Memoir in the Spear’s Book Awards 2014 and was shortlisted for the 2015 Pen Ackerley Prize. Meades has written and performed in more than 50 television shows on predominantly topographical subjects such as shacks, garden cities, and megastructures. He is currently working on a film about Franco. His most recently broadcast film was Jonathan Meades on Jargon (BBC Four), described in The Guardian as `blisteringly brutal, clever and hilarious’.