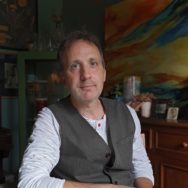 Mark Mechan grew up in Broughty Ferry with his mum and dad, and is the youngest of four siblings — two sisters and a brother.

He went to Forthill Primary and Dundee High, then to Duncan of Jordanstone College of Art in 1988 where he studied Drawing & Painting.

After a few years as a Medical Illustrator in Glasgow, Mark moved into publishing, and as a graphic designer and illustrator for Waverley Books, was part of the team that created the hit Maw Broon’s Cookbook and subsequent Broons and Oor Wullie titles in conjunction with DC Thomson.  Mark works as a freelance illustrator and designer as Red Axe Design, and after creating book covers for hundreds of titles over the years has now become author/illustrator himself, with his debut book Tumshie. He now lives in Hamilton with his three children and wife Alison.