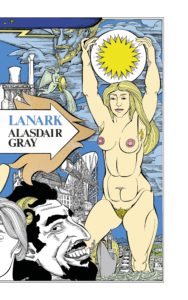 40th anniversary edition’Probably the greatest novel of the century’ ObserverLanark, a modern vision of hell set in the disintegrating cities of Unthank and Glasgow, tells the interwoven stories of Lanark and Duncan Thaw. A work of extraordinary imagination, its playful narrative conveys a profound message, both personal and political, about humankind’s inability to love, and yet our compulsion to go on trying.First published in 1981, Lanark established Alasdair Gray as one of Britain’s leading writers and kickstarted the modern renaissance of Scottish literature.

Born in 1934, Alasdair Gray graduated in design and mural painting from the Glasgow School of Art. Since 1981, when Lanark was published by Canongate, he authored, designed and illustrated seven novels, several books of short stories, a collection of his stage, radio and TV plays and a book of his visual art, A Life in Pictures. In November 2019, he received a Lifetime Achievement award by the Saltire Society. He died in December 2019, aged eighty-five.