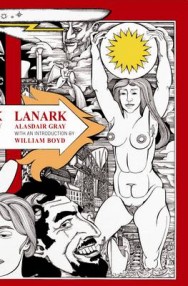 Home > Fiction from Scotland > Lanark: A Life in Four Books

Lanark: A Life in Four Books

“Lanark”, a modern vision of hell, is set in the disintegrating cities of Unthank and Glasgow, and tells the interwoven stories of Lanark and Duncan Thaw. A work of extraordinary imagination and wide range, its playful narrative techniques convey a profound message, both personal and political, about humankind’s inability to love, and yet our compulsion to go on trying. Widely recognised as a modern classic, Alasdair Gray’s magnum opus was first published in 1981 and immediately established him as one of Britain’s leading writers. Comparisons have been made to Dante, Blake, Joyce, Orwell, Kafka, Huxley and Lewis Carroll. This new edition should cement his reputation as one of our greatest living writers.

Reviews of Lanark: A Life in Four Books

'I was absolutely knocked out by Lanark. I think it's the best in Scottish literature in the twentieth century.' Iain Banks

ALASDAIR GRAY is an old asthmatic Glaswegian who lives by painting, writing and book design. His books include the novels 1982 Janine, The Fall of Kelvin Walker, McGrotty and Ludmilla, Poor Things, A History Maker; short story collections Unlikely Stories Mostly, Ten Tales Tall & True, Mavis Belfrage, The Ends of Our Tethers; poetry Old Negatives; polemic Why Scots Should Rule Scotland 1992, Why Scots Should Rule Scotland 1997, How We Should Rule Ourselves (with Adam Tomkins); play Working Legs (for people without them); autobiography Satire Self Portrait 4; literary history The Anthology of Prefaces. His commentary on his paintings and drawings, A Life in Pictures, will be published by Canongate in 2007. His hobbies are socialism and liking the English.