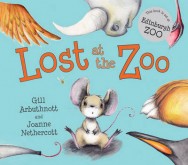 Lost at the Zoo

Rory the pet mouse goes on a trip to Edinburgh Zoo in Sam’s pocket. He leans out to get a better look and falls into the anteater’s enclosure. How will wee Rory ever find Sam again in the enormous zoo? ‘Have you seen Sam?’ Rory asks, and tries to describe his owner. He tells the zebra Sam’s got sticky-out sandy hair, and gets sent to the lion! He tells the lion Sam’s got big round eyes, and gets sent to the owl! Rory meets lots of animals — a helpful anteater, a polite zebra, a grumpy lion, a hungry owl, a friendly rhino, the elegant flamingos and the blethering penguins, who take him along on their penguin parade. But will he ever find Sam? This charming zoo story, full of wonderful animal characters, is beautifully illustrated by talented young artist, Joanne Nethercott.

Gill Arbuthnott was born and brought up in Edinburgh, but escaped briefly to study in St Andrews and Southampton. She couldn’t stay away, however, and now lives in Edinburgh with her family and Leonard the cat. When she’s not writing, she works as a biology teacher. She says writing for children is possibly the best job in the world. She has written several novels for older children: The Chaos Clock, The Chaos Quest and Winterbringers (all Floris Books), as well as books with Barrington Stoke and The Keeper’s Daughter, published by Chicken House. Lost at the Zoo is her first picture book. Joanne Nethercott is originally from Northern Ireland. She moved to Scotland in 2001 to study illustration at Duncan of Jordanstone College of Art and Design in Dundee. She has had work commissioned by the National Theatre of Scotland. She lives in Edinburgh and works from her studio at home. She is the illustrator of Ginger Nut (Picture Kelpies, 2011).