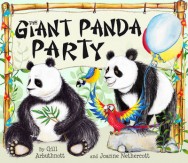 Sunshine, the giant panda, is grumpy. His birthday is coming and he’s sure no one will remember. But his best friend Sweetie has a plan. She sneaks around the zoo at night, asking all the other animals whether they can sing. The lion roars, the python hisses and the chimps say OO OO OOO! But which zoo animal has the best singing voice? Will grumpy Sunshine get a giant birthday surprise? Gill Arbuthnott’s hilarious story of animal hijinks and Joanne Nethercott’s endearing and lively illustrations combine for an entertaining romp set in Edinburgh Zoo! From the team who brought you Lost at the Zoo.

Gill Arbuthnott was born and brought up in Edinburgh, but escaped briefly to study in St Andrews and Southampton. She couldn’t stay away, however, and now lives in Edinburgh with her family and Leonard the cat. When she’s not writing, she works as a biology teacher. She says writing for children is possibly the best job in the world. She is the author of another Picture Kelpie, Lost at the Zoo, and she has also written several novels for older children: The Chaos Clock, The Chaos Quest and Winterbringers (all Floris Books), as well as books with Barrington Stoke and The Keeper’s Daughter, published by Chicken House. Joanne Nethercott is originally from Northern Ireland. She moved to Scotland in 2001 to study illustration at Duncan of Jordanstone College of Art and Design in Dundee. She has had work commissioned by the National Theatre of Scotland. She lives in Edinburgh and works from her studio at home. She is the illustrator of two other Picture Kelpies picture books, Ginger Nut, and Lost at the Zoo.