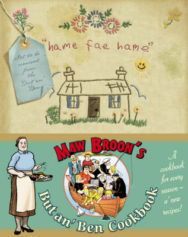 Home > Sports & Hobbies > Maw Broon’s But An’ Ben Cookbook: A Cookbook for Every Season, Using All the Goodness of the Land

Maw Broon’s But An’ Ben Cookbook: A Cookbook for Every Season, Using All the Goodness of the Land

A cookbook with a difference, this nostalgic collection of recipes dates back to 1940 and is entirely different, but just as good as, the first Maw Broon cookbook. Funny, inventive and full of humour and comic strips from “The Broons”, with witty comments from the family members throughout, this second cookbook has more balance with both sweet, traditional, recipes as well as recipes with lighter, healthier ingredients.

Reviews of Maw Broon’s But An’ Ben Cookbook: A Cookbook for Every Season, Using All the Goodness of the Land

' Take a telling from Maw Broon. The braw times are back. Spirit of the times says all that cheffy stuff is so last year. Canny cooks are laying down stocks of the matriarch's But An' Ben Cookbook before the Sassenachs scoop 'em all up for their holiday cottages. The look, as befits a credit-crunch Hogmanay, is battered, well-thumbed household-cum-cookbook with stuck-in clippings and margin-notes, mostly deserving of a clip round the ear. Recipes are handwritten but legible, and the style, as devotees of the strip-cartoon will recognise, is irreverance in the vernacular: rude, on the button and very very funny. It's not all cloutie dumpling and auld alliance pudding either, though you'll not be shortchanged in that department. Maw Broon learned her stuff in the '40's, knows all about seasonal and local, not to mention making-do with hedgerow and shore-gatherings: you'll find nettle soup, perch baked with cream, brownies fried in butter, birch-sap wine, soused mackerel. Hogmanay treats include black bun, shortbread and Maw's favourite home-made Advocaat with evaporated milk. So go on, gies another bit o' the gingerbread. ' Elisabeth Luard, The Scotsman 'Maw Broon is back but this time is stuffed with recipes, tips and some memorable family events from Scotland's first family, with a decidedly holiday feel to them. Many involve ingredients that have been foraged from field and hedgerow, loch and stream. There are plenty of simple recipes for those members of the family who lack her vast experience. Essential!' I-On Magazine Sept 08 'Healthy foods the Maw Broon way.' Maw Broon's back in the kitchen, and teaching the nation to cook – but this time healthy recipes are included. Her first cookbook horrified health experts with the fat and sugar content, but this book, while featuring some of the lard, is much more nutritious. Dishes use local produce and include sweet chestnut burgers, bramble jeely and turnip wine. Her new cookbook uses great Scottish produce – Nutritionist Carina Norris said: 'it's great to celebrate Maw Broon and all that's good about the Scottish diet. And, after all, at least Maw Broon cooks for her family, rather than going out for a takeaway every night.' BBC News 18/9/08 'The two cookbooks are artfully crafted to look like the sort of thing your granny kept. With the publication of the first book, suddenly clootie dumpling, Scotch broth, drop scones and suet pudding were back on everyone's menu. Unlike its predecessor, the But an' Ben Cookbook is a collection of recipes for healthy meals contributing to getting your five a day, with instructions on how to make low-fat versions of Scottish family favourites and in this book Maw Broon recommends using organic ingredients. It also lists gardening tips from Granpaw, as well as full-fat old-fashioned dishes like lamb hot-pot.' News.STV.tv 'Includes treats like Maw Broon's honey cake, chocolate muffins, Auld Alliance pudding, apple pie – complete with six tablespoons of lard, and a Poke an' a stalk. But there are occasional concessions to the diet-conscious too. This year the first book has sold more than Delia Smith's Complete Cookery Course, Jamie Oliver's Cook with Jamie and Gordon Ramsay's Fast Food.' Daily Mail Cleverly-designed with seemingly hand-written notes, taped-in recipes and cooking stains.' The Herald 'But an' Ben – Listen to your maw! Maw Broon's latest cookbook is a slim line follow-up with lighter options. It's a healthier option – a recipe for success.' Metro London 'The last volume was one of the bestselling titles of last year and this new book is sure to please an audience of all ages. If you chuckled at some of the ingredients from times past in Maw's original cookbook, and then this new instalment is sure to please. Braw!' Paisley Daily Express

Maw Broon is the matriach of the 11-strong family The Broons. The Broons, whose comic strip has appeared every week in D C Thomson’s Sunday Post for more than 70 years, is Scotland’s most-loved cartoon family.