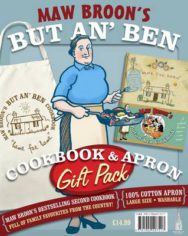 “The Maw Broon’s But an’ Ben Cookbook” is the follow-up book to “Maw Broon’s Cookbook”. The book has been called ‘healthier’ than the first, but this volume also has its share of butter, cream and sugar, as well as honey, nettles and veggie favourites! This is an ideal gift set for anyone who appreciates country cooking at its best. The strong, clear, presentation box contains one copy of the bestselling Maw Broon’s “But an’ Ben Cookbook”, which dominated the Scottish Charts in autumn 2008, packed with the unique, and special Maw Broon’s “But an’ Ben Apron”. It is made of 100 per cent cotton, large size, washable, packed in a presentation box with Maw’s winning recipe for Shortbread.

Reviews for the book: Maw Broon's But an' Ben Cookbook – the national bestseller ' Canny cooks are laying down stocks of the matriarch's But An' Ben Cookbook before the Sassenachs scoop 'em all up for their holiday cottages. The style. is irreverance in the vernacular: rude, on the button and very, very funny.' Elisabeth Luard, The Scotsman 'Stuffed with recipes, tips and some memorable family events from Scotland's first family, with a decidedly holiday feel to them. Many involve ingredients that have been foraged from field and hedgerow, loch and stream. There are plenty of simple recipes for those members of the family who lack her vast experience. Essential!' I-On Magazine 'Healthy foods the Maw Broon way – Maw Broon's back in the kitchen, and teaching the nation to cook – but this time healthy recipes are included. Her new cookbook uses great Scottish produce – Nutritionist Carina Norris said: 'it's great to celebrate Maw Broon and all that's good about the Scottish diet. And, after all, at least Maw Broon cooks for her family, rather than going out for a takeaway every night.' BBC News 'A collection of recipes for healthy meals contributing to getting your five a day, with instructions on how to make low-fat versions of Scottish family favourites and in this book Maw Broon recommends using organic ingredients. It also lists gardening tips from Granpaw, as well as full-fat old-fashioned dishes like lamb hot-pot.' STV news 'Many treats' Daily Mail 'Cleverly-designed' The Herald 'But an' Ben – Listen to your maw! Maw Broon's latest cookbook is a slim line follow-up with lighter options. It's a healthier option – a recipe for success.' Metro London

Maw Broon shot to the top of the bestseller charts in Scotland with her first cookbook in 2007, and since then has sold 230,000 copies of Maw Broon’s Cookbook. Her second cookbook, Maw Broon’s But an’ Ben Cookbook was published in autumn 2008 and it is this book that is presented in the gift pack. The second book contains younger recipes,dating back to the 1940s, and uses seasonal and local produce.