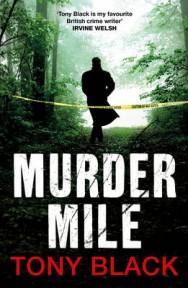 In a cold, windswept field on the outskirts of Edinburgh, lies the brutally mutilated body of a young woman. As DI Rob Brennan looks at the tangled mass of limbs and blood, he feels his heart freeze. Like Fiona Gow five years earlier, this girl has been strangled with her own stockings, sexually mutilated and her eyes have been gouged out. Is this the work of an Edinburgh Ripper? The press certainly think so. Rob Brennan is determined to uncover the truth – however painful that might be. But truth is hard to come by in a world of police rivalries, media hysteria and copycat crime.

"Tony Black's Edinburgh makes Ian Rankin's version of the city seem sedate, polite and carefree … makes a strong case to assume the mantle of Edinburgh's leading fictional detective, vacant since the retirement of Rankin's Rebus" Marcel Berlins, The Times "Comparisons with Rebus will be obvious. But that would be too easy … Black has put his defiant, kick-ass stamp on his leading man, creating a character that deftly carries the story through every razor-sharp twist and harrowing turn. DI Rob Brennan is my new star on the capital's murder mile. And you can't help but think Rebus would approve" Daily Record "Murder Mile is the second outing for DI Rob Brennan, a complex and brooding character who makes Rebus look positively chipper by comparison … With Murder Mile Tony Black has put the heart back into the serial killer novel. It's dark, yes, and deeply unpleasant in places, as it should be, but he hasn't played to shock and there's a refreshing lack of cheap gore. Rob Brennan is the perfect guide to follow through the criminal underworld, a bundle of rage and righteousness, and after reading Murder Mile the next fictional DI you come across will have a lot to live up to" Crime Fiction Lover "A convincing portrayal" Sun "Brennan's Edinburgh roils and seethes with violence" Metro

Tony Black is an award-winning journalist who has written for most of the national newspapers. He is the author of Paying for It, Gutted, Loss and Long Time Dead. For more information visit www.tonyblack.net.