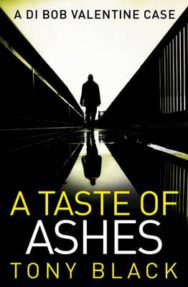 Home > Fiction from Scotland > A Taste of Ashes: A DI Bob Valentine Story

A Taste of Ashes: A DI Bob Valentine Story

Following the harrowing case that nearly finished him off, DI Bob Valentine returns to normal duties in the heart of Burns Country on Scotland’s wind-scarred west coast. But all is not well in the town of Ayr, a place ravaged by austerity and slipping closer to the abyss every day. As the near eviscerated corpse of a man is discovered on his kitchen table, fear grips the area and a murder investigation, probing a series of new lows for the town, gets underway. To add to Valentine’s woes, the victim’s partner is missing – as is her daughter. When a son with a violent past is added to the mix, and the crime tally mounts, a tragic family drama starts to unfold. Drawn to uncover the truth, and haunted by his own nagging doubts about the case, the detective pushes himself ever harder, stretching his own fragile health and delicate home life. Valentine is still battling a post-traumatic stress that initially led to terrifying visions but now threatens to reveal the horrors of the victim’s last moments and an afterlife that seems to be calling to him with increasing regularity.Amidst a frenzied media storm, and a ticking clock adding fears for the missing, the investigator must work fast to piece together the illicit secrets of the family’s past before the body count increases.

Tony Black is the author of seven previous novels. An award-winning journalist, he was born in Australia and grew up in Scotland and Ireland. Tony has been described by Irvine Welsh as his ‘favourite British crime writer’.