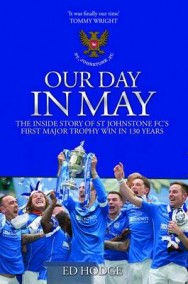 Home > Sports & Hobbies > Sports & Outdoor Recreation > Our Day in May: The Inside Story of St Johnstone FC’s First Major Trophy Win in 130 Years

Our Day in May: The Inside Story of St Johnstone FC’s First Major Trophy Win in 130 Years

May 17, 2014: the greatest date in St Johnstone Football Club’s history. The day the Perthshire outfit saw 130 years of waiting to lift a major trophy come to a glorious end. In his first full season in charge, manager Tommy Wright and his team entered the history books after winning the Scottish Cup thanks to a 2-0 win over Tayside rivals Dundee United.Roared on by 15,000 fans, Saints achieved glory on an unforgettable afternoon at Celtic Park in Glasgow, capping a remarkable season for one of the game’s perennial underdogs. With Stevie May, the club’s talismanic striker and semi-final hero, wearing the No 17 shirt, cup final day appeared destined for Saints, before two other Stevens – Anderson and MacLean – emerged as the matchwinners.Our Day in May is the story of how St Johnstone won the Scottish Cup, told by the management team and the players involved in the Fair City club’s historic success. It’s a story for any St Johnstone fan to treasure, a story told by those who are heroes forever. All Royalties from this book go to St Johnstone FC Youth Development

Reviews of Our Day in May: The Inside Story of St Johnstone FC’s First Major Trophy Win in 130 Years

'No matter what I do, if I was to go and win the Champions League with another club, it won't eclipse winning the Scottish Cup with St Johnstone. It couldn't, not for raw emotion and what it meant to people.' Tommy Wright, St Johnstone manager

Ed Hodge grew up in Braco, Perthshire and has been a St Johnstone fan since McDiarmid Park first opened its turnstiles in 1989. Ed now lives in Linlithgow with his wife, Iona, and their two young children and has followed St Johnstone home and away at more games than he can remember. Boasting 14 years experience in the sports media industry in Scotland across a variety of roles, he is now PR & Media Executive for the Scottish Golf Union and is the author of Jewel in the Glen: Gleneagles, Golf and The Ryder Cup.