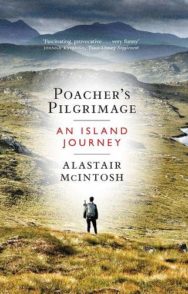 The islands of the Outer Hebrides are home to some of the most remote and spectacular scenery in the world. They host an astonishing range of mysterious structures – stone circles, beehive dwellings, holy wells and ‘temples’ from the Celtic era. Over a twelve-day pilgrimage, often in appalling conditions, Alastair McIntosh returns to the islands of his childhood and explores the meaning of these places. Traversing moors and mountains, struggling through torrential rivers, he walks from the most southerly tip of Harris to the northerly Butt of Lewis. The book is a walk through space and time, across a physical landscape and into a spiritual one. As he battled with his own ability to endure some of the toughest terrain in Britain, he met with the healing power of the land and its communities.

This is a moving book, a powerful reflection not simply of this extraordinary place and its people met along the way, but of imaginative hope for humankind.

His books include Hell & High Water: Climate Change, Hope and the Human Condition on the cultural and spiritual dimensions of climate change, Rekindling Community on the spiritual basis of inter-relationship, and Soil and Soul: People versus Corporate Power on land reform and environmental protection – the latter described as “world changing” by George Monbiot, “life changing” by the Bishop of Liverpool and “truly mental” by Thom Yorke of Radiohead.

For the past 9 years he and his wife, Vérène Nicolas, have lived in Govan where he is a founding director of the GalGael Trust for the regeneration of people and place. A Quaker, he lectures around the world at institutions including WWF International, the World Council of Churches, the Russian Academy of Sciences and the UK Defence Academy (on nonviolence). His driving passion is to explore the deep roots of what it can mean to become fully human, and use such insights to address the pressing problems of our times.