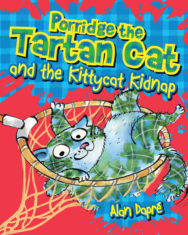 Porridge the Tartan Cat and the Kittycat Kidnap

When Porridge was a wee kitten he toppled into a tin of tartan paint — which is easy to do and not so easy to say.Now he lives by Loch Loch with the quirky McFun family: Gadget Grandad, Groovy Gran, Dino Dad, Mini Mum and the twins, Roaring Ross and Invisible Isla. Everyone has a super secret — or two– and Porridge is always there to lend a helping paw when things go awry. If there’s a fishy biscuit in it for him…And things do often go awry in the McFun family. It’s a good job Porridge has nine lives!————–Porridge the Tartan Cat (it’s a long story involving a tin of tartan paint!) has been cat-napped! But nobody has noticed! The twins, Isla and Ross, are too busy trying to help their super-scientist mum who has accidentally shrunk herself with some super-short shortbread.Will the twins be able to unshrink Mini Mum? Can they rescue Porridge from a pet shop infested with crocodiles, dung beetles and his arch-enemy Moggiarty?—————–In this zany new series for young readers, Porridge purrfectly CAT-a-logs the family’s hilarious adventures from a cat’s-eye perspective. With wacky twists, silly word play and meow-nificent illustrations in every chapter, readers won’t even want to paws for breath.