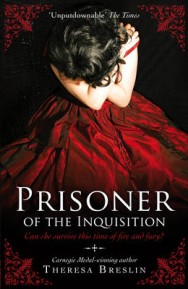 Prisoner of the Inquisition

Zarita, only daughter of the town magistrate, lives a life of wealth and privilege. Indulged by her parents, she is free to spend her days as she pleases, enjoying herself in the company of an eligible young nobleman, horse riding, or leisurely studying the arts. Saulo, son of a family reduced by circumstances to begging, witnesses his father wrongfully arrested and dealt with in the most horrifying way. Hauled off to be a slave at sea and pursued by pirates he encounters the ambitious mariner explorer, Christopher Columbus. Throughout his hardships Saulo is determined to survive – for he has sworn vengeance on the magistrate and his family. As Zarita’s life also undergoes harsh changes the formidable and frightening Inquisition arrives in the area, bringing menacing shadows of suspicion with acts of cruel brutality – and ultimately, amid the intrigues of the court of Queen Isabella and King Ferdinand in the splendid Moorish city of Grenada, betrayal and revenge …