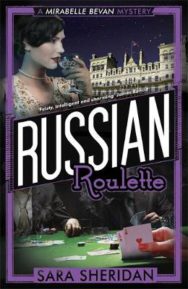 Brighton 1956When Mirabelle’s on-off boyfriend, Superintendent Alan McGregor, is taken off a gruesome murder case because the key suspect is an old school friend, Mirabelle steps in to unravel the tangle of poisoned gin, call girls and high stakes gambling that surrounds the death. It isn’t long before McGregor’s integrity is called into question and Mirabelle finds herself doubting him. So when a wartime hero’s body turns up on the Sussex Downs, she is glad that McGregor is caught up in a mystery of his own as Brighton’s establishment closes ranks.Mirabelle is in a dangerous situation though and she doesn’t have McGregor watching her back on this one. And when the dead man on the Downs turns out to have been a member of a deadly thrillseekers club, related to the earlier murder, Mirabelle is determined to uncover the truth and free the innocent people who are bearing the brunt of the cover up. As her relationship with McGregor reaches breaking point, she has to draw on all her wartime experience to stand up for what she believes in – even if it means their relationship may not survive.

Beneath that prim exterior lies a fearless, fly-by-the-seat-of-her-pants kind of gal. One part Nancy Drew, two parts Jessica Fletcher, Mirabelle has a dogged tenacity to rival Poirot * Sunday Herald * Beautifully realised vivid characters, both heroes and villains, the atmospheric Brighton setting and plot that zipped along at a lovely pace left me in no doubt that Sara Sheridan and Mirabelle Bevan are a crime force to be reckoned with * Goodreads * Sara Sheridan never fails to surprise. Unfailingly stylish, undeniably smart, Miss Bevan is destined to bring the exploits of the past to the best-seller lists of the present * Daily Record *

Sara Sheridan was born in Edinburgh and studied at Trinity College, Dublin. As wellas writing the popular Mirabelle Bevan Murder Mysteries, she also writes a setof historical novels set between 1820 and 1845, the latest of which wasshortlisted for the Wilbur Smith Award. Fascinated particularly by female history, she is a cultural commentator who appears regularly on television andradio. In 2014, she was named one of the Saltire Society’s 365 Most Influential Scottish Women, past and present.