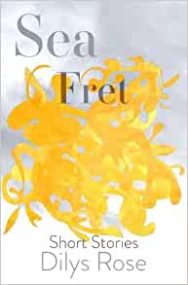 Two travelling musicians attempt to come to terms with a nightmare scenario at home; restless teenagers run riot during lockdown, with drastic consequences; Albert Einstein’s reputation grows, as does his absence as a father; a cantankerous ninety-nine year old contributes to the chaos of a night ward….

Dilys Rose has been compared to Katherine Mansfield. An accomplished novelist and short-story writer, Rose’s long-celebrated mastery of the form allows her to draw through lines of loss and longing, uncertainty and hope. She conjures the essence of a situation with insight, economy and dark wit, and vividly presents an uncompromising view of the world where everyone is searching but few find what they hope for. Each story vividly creates the inner world of a compelling, yet disparate cast of characters, and these brief glimpses into the lives of others leave a lasting afterglow.

'The author's eye is so sharp, her hearing so acute, her imagination so lively. This is a very good collection indeed. Even some of those who say they don’t care for short story collections might well set their prejudice aside and find much to delight them.' –Alan Massie, The Scotsman

Dilys Rose was born and brought up in Glasgow. Edinburgh has been her home for many years. Previous publications include three collections of short stories, Our Lady of the Pickpockets, Red Tides and War Dolls, three of poetry – Beauty is a Dangerous Thing, Madame Doubtfire’s Dilemma, and Lure, and a novel, Pest Maiden.

She has also written for stage and collaborated with musicians and visual artists. Awards include the first Macallan/Scotland on Sunday Short Story Prize, The R.L.S. Memorial Award, The Society of Authors’ Travel Award, The Canongate Prize and two Scottish Arts Council Book Awards. Red Tides was short-listed for both the McVitie’s Scottish Writer of the Year and the Saltire Scottish Book of the Year. Pest Maiden was nominated for the Impac Prize.