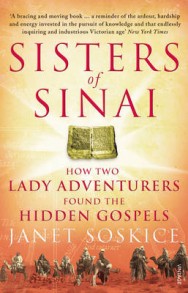 Sisters of Sinai is the story of how Scottish twin sisters made one of the most important manuscript finds of the nineteenth century – an early copy of the gospels which lay hidden in the Sinai desert. We trace the footsteps of the intrepid pair from the Ayrshire of their childhood, as they voyage to Egypt, Sinai and beyond, coping with camels, unscrupulous dragomen, and unpredictable welcomes, not least from the academics of their adopted home in Cambridge. Fast-paced, informative and written with dry wit, this is a story of two remarkable women, undeterred in their spirit of adventure, who overcame insuperable odds to claim a place in history.

Janet Soskice grew up in Canada and has lived for some years in England where she is Reader in Philosophical Theology at Jesus College, University of Cambridge. As well as lecturing around the world, she writes for the Times and The Times Literary Supplement, and is a frequent contributor to radio and television.