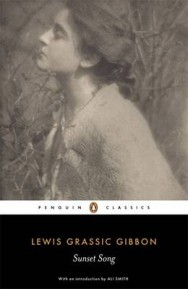 Young Chris Guthrie lives a brutal life in the harsh landscape of northern Scotland, torn between her passion for the land, duty to her family and her love of books. When her mother, broken by repeated childbirths, takes her own life and poisons her two youngest children, Chris is left with her father to run the farm on her own. Soon, she is alone, and for the first time can choose how to spend her life. But, as the First World War begins, everything changes, and the young men leave Scotland for battle. The first in Gibbon’s classic trilogy, “A Scot’s Quair, Sunset Song” is infused with local vernacular, and innovatively blends Scots and English in an intense description of Scottish life in the early twentieth century.

"His three great novels have the impetus and music of mountain burns in full spate." -"The Observer" (London)

Lewis Grassic Gibbon (1901-1935) is the celebrated pen-name of James Leslie Mitchell, one of the outstanding figures in Scottish Literature, world famous as the author of the trilogy of novels known as A Scots Quair. Ali Smith’s first book, Free Love, won the Saltire First Book Award. Hotel World was shortlisted for both the Orange Prize and the Booker Prize in 2001 and won the Encore Award and the Scottish Arts Council Book of the Year Award in 2002. Her latest novel The Accidental (2005) won the Whitbread award for best novel.