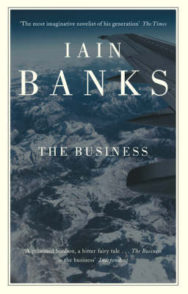 Home > Fiction from Scotland > The Business

Kate Telman is a senior executive officer in The Business, a powerful and massively discreet transglobal organisation. Financially transparent, internally democratic and disavowing conventional familial inheritance, the character of The Business seems, even to Kate, to be vague to the point of invisibility. It possesses, allegedly, a book of Leonardo cartoons, several sets of Crown Jewels and wants to buy its own State in order to acquire a seat at the United Nations. Kate’s job is to keep abreast of current technological developments and her global reach encompasses Silicon Valley, a ranch in Nebraska, the firm’s secretive Swiss headquarters, and a remote Himalayan principality. In the course of her journey Kate must peel away layers of emotional insulation and the assumptions of a lifetime. She must learn to keep her world at arm’s length. To take control, she has to do The Business.

Reviews of The Business

Consistently engaging…From its hilarious opening, a telephone conversation with a man who has lost his teeth, to the touching finale…it hardly misses a beat. SUNDAY TELEGRAPH 'Slick and streetwise. SUNDAY TIMES Bank s' ability to make you feel you're there remains as sharp as ever. TIME OUT '…a slick, blend of thriller, dark comedy and offbeat love story, bursting with set pieces and sly wit. EMPIRE …Satisfyingly readable to the end MAXIM THE BUSINESS is his tenth novel… and reveals no slackening in his imaginative energies MAIL ON SUNDAY

Iain Banks came to widespread and controversial notice with the publication of THE WASP FACTORY, in 1984, and has since gained enormous popular and critical acclaim. In 1993 he was acknowledged as one of the Best of Young British Writers.