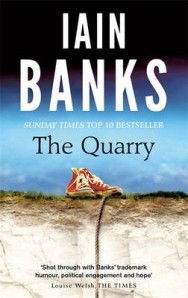 Home > Fiction from Scotland > The Quarry

Kit doesn’t know who his mother is. What he does know, however, is that his father, Guy, is dying of cancer. Feeling his death is imminent, Guy gathers around him his oldest friends – or at least the friends with the most to lose by his death. Paul – the rising star in the Labour party who dreads the day a tape they all made at university might come to light; Alison and Robbie, corporate bunnies whose relationship is daily more fractious; Pris and Haze, once an item, now estranged, and finally Hol – friend, mentor, former lover and the only one who seemed to care. But what will happen to Kit when Guy is gone? And why isn’t Kit’s mother in the picture? As the friends reunite for Guy’s last days, old jealousies, affairs and lies come to light as Kit watches on.

Reviews of The Quarry