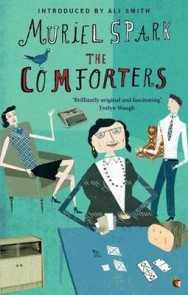 Home > Fiction from Scotland > The Comforters

In Muriel Spark’s fantastic first novel, the only things that aren’t ambiguous are her matchless originality and glittering wit. Caroline Rose is plagued by the tapping of typewriter keys and the strange, detached narration of her every thought and action. She has an unusual problem – she realises she is in a novel. Her fellow characters are also possibly deluded: Laurence, her former lover, finds diamonds in a loaf of bread – could his elderly grandmother really be a smuggler? And Baron Stock, her bookseller friend, believes he is on the trail of England’s leading Satanist.

Reviews of The Comforters