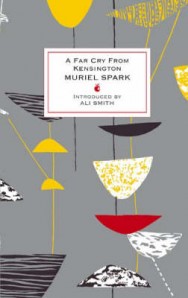 Home > Fiction from Scotland > A Far Cry from Kensington

With a cover design by Lucienne Day When Mrs Hawkins tells Hector Bartlett he is a ‘pisseur de copie’, that he ‘urinates frightful prose’, little does she realise the repercussions. Holding that ‘no life can be carried on satisfactorily unless people are honest’ Mrs Hawkins refuses to retract her judgement, and as a consequence, loses not one, but two much-sought-after jobs in publishing. Now, years older, successful, and happily a far cry from Kensington, she looks back over the dark days that followed, in which she was embroiled in a mystery involving anonymous letters, quack remedies, blackmail and suicide.

Reviews of A Far Cry from Kensington

The divine Spark is shining at her brightest … Pure delight Claire Tomalin, INDEPENDENT An outstanding novel … A FAR CRY FROM KENSINGTON has an effortless, transluscent grasp of the spirit of the period OBSERVER 'Wonderfully entertaining – full of absurd, comical, engaging characters and written with typical wit, elegance and aplomb SUNDAY TELEGRAPH One of Muriel Spark's most liberating, liberated and meditative novels. Spark is a writer who can take the meditative and make it mercurially funny, playful and mischievous Ali Smith