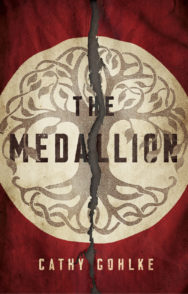 Home > Fiction from Scotland > The Medallion

Fastening the slender golden chain around Rosa’s neck, Itzhak Dunovich seals their marriage vows with a medallion, symbolizing the joy of new life. Yet the young couple never imagine that they would welcome their longed-for first child in the Jewish ghetto, or that they would let anything tear their family apart. Sophie Kumiega, a British bride working in Warsaw’s library, awaits news of her husband, recently deployed with the Polish Air Force. Though Sophie is determined that she and the baby in her womb will stay safe, the days ahead will draw her into the plight of those around her, compelling her to help, whatever the danger.

Seemingly overnight, the German blitzkrieg of Warsaw in 1939 turns its streets to a warzone and shatters the life of each citizen – Polish, Jewish or otherwise. As daily privations intensify, Rosa soon faces a terrifying reality: to save their daughter’s life, she must send her into hiding. Her only hope of finding her after the war – if any of them survive – is the medallion, cut in half and placed around her daughter’s neck.

Inspired by true events of Poland’s darkest days and brightest heroes, The Medallion paints a stunning portrait of war and its aftermath, daring us to believe that when all seems lost, hope can make a way forward.

Cathy Gohlke is the three-time Christy Award–winning author of the critically acclaimed novels The Medallion, Until We Find Home, Secrets She Kept, (Christy, Carol and INSPY Awards), Saving Amelie (INSPY Award), Band of Sisters, Promise Me This (listed by Library Journal as one of the best books of 2012), William Henry Is a Fine Name (Christy Award), and I Have Seen Him in the Watchfires (Christy Award), which also won the American Christian Fiction Writers’ Book of the Year Award and was listed by Library Journal as one of the best books of 2008. She writes novels steeped with inspirational lessons, speaking of world and life events through the lens of history and championing the battle against oppression. Inspiration for her stories, poetry, and drama have come from a love of history, as well as from her large and interesting family, the people she’s known, and the places she’s lived — North and South — on farms and in small towns. Cathy’s writing has also appeared in Chicken Soup for the Single’s Soul, in My Turn to Care – Affirmations for Caregivers of Aging Parents, in newspapers, magazines, and in plays and monologues produced on local stages. When not travelling to historic sites for research, she, her husband and their dog, Reilly, divide their time between northern Virginia and the Jersey Shore.