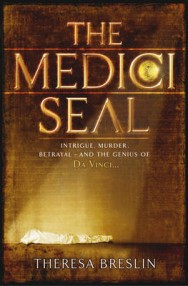 Romagna, Italy 1502. Fleeing from the murderous brigand Sandino, Matteo – a young boy – is saved from drowning by the companions of Leonardo da Vinci. From this moment on, Matteo is at the Maestro’s side as he carries out his work, which ranges from the painting of magnificent frescos to intricate dissection of the human body. But Leonardo is employed by Cesare Borgia, head of one of Italy’s leading families. Cruel and ruthless, the Borgia punishes without mercy those who oppose him or who threaten him in any way. And as Da Vinci and Matteo travel across Italy on the Borgia’s business, murder, deceit and revenge follow in their trail. For Matteo carries with him a secret – a secret that both the Borgia and Medici families would kill to obtain. A life-changing secret that must, finally, come to light for all to see …A gloriously rich and authentic story of the Renaissance, The Medici Seal is also both the personal story of Matteo, a boy becoming a man, and a fascinating glimpse into the world of Da Vinci.

Reviews of The Medici Seal

Theresa Breslin is a well-respected author, popular with librarians, teachers and children. She has won the Carnegie Medal for WHISPERS IN THE GRAVEYARD and achieved critical success with her two novels about KEZZIE, set in the Second World War. Her titles for the RHCP lists include the DREAM MASTER series, REMEMBRANCE and DIVIDED CITY, which has been shortlisted for the Sheffield Children’s Book Award 2006 and long listed for the Carnegie Medal.